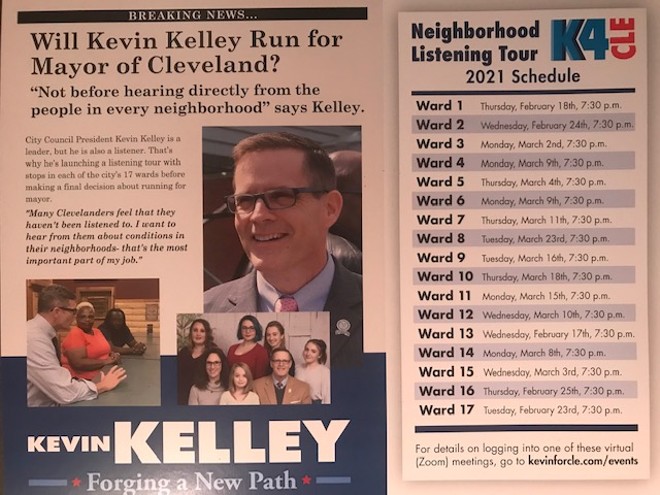 City Council President Kevin Kelley is launching a neighborhood listening tour that will help him determine, he says, whether or not he will run for Mayor. From Feb. 17 through Mar. 23, Kelley will host Zoom meetings with each of the City of Cleveland's 17 wards to hear residents' concerns about the city.

"Many Clevelanders feel that they haven't been listened to," reads a Kelley quote in a weekend citywide mailer, (image above). "I want to hear from them about conditions in their neighborhoods. That's the most important part of my job."

Feedback from residents was billed, in the mailer, as a precondition for Kelley's campaign launch. "Will Kevin Kelley run for Mayor of Cleveland?" It teased ... "Not before hearing directly from the people in every neighborhood," says Kelley.

As many have noted on social media, residents don't "feel that they haven't been listened to"; they straight-up haven't. Look no further, they say, than Kelley's refusal to institute public comment at City Council meetings. If listening to residents is indeed the most important part of his job, why has he barred them from speaking at the one venue where they'd regularly have his attention?

Kelley has an enormous campaign war chest — more than $500,000 on hand, as of January — and has been laying the groundwork for a run for nearly a year. Unlike Sen. Sherrod Brown, whose "Dignity of Work" tour resulted in his decision not to seek the Democratic nomination for president in early 2019, Kelley's listening tour is much more like an extended pre-launch campaign event, part of a larger effort to rehabilitate his image. As a frontrunner and cash-rich candidate in a field increasingly marked by timidity, deciding not to run would be an astonishing move, (unless his advisors convince him that running for Cuyahoga County Executive is the smarter play.)

And yet, if Kelley won't announce until the conclusion of this listening tour, his campaign can't officially get underway until late March. The primaries are in September.

In the press release announcing the tour, Kelley's team called the individual ward events "town halls," and said that Kelley would "kick off the discussion and answer as many questions as possible from participants."

"Residents are encouraged to join, engage in conversation, and have a chance to be heard on the issues that matter to them the most," it read. The full schedule is included at this link. The first event will be held in Kelley's own Ward 13 Wednesday evening.