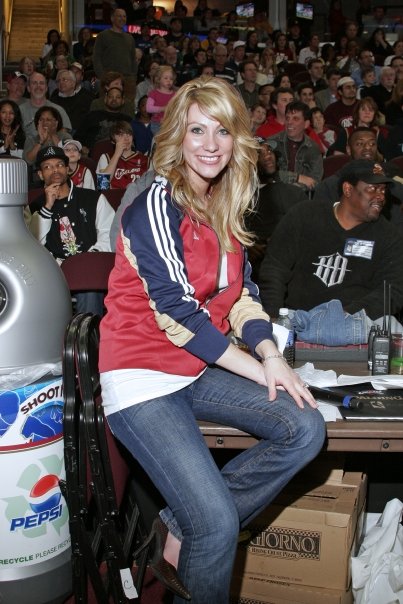 VG: How did you get the gig?

Nicole: This is my fourth season now. Back then, I saw they were hosting auditions. The first audition was at St. Ed's. I don't know how many people showed up. We took a look at a script and gave it a read. Then they narrowed it down and we went to the Q. There was a small group. They paired us up with a guy because they wanted to see how we would interact because they were also looking for a PA announcer at the time. Then they had us run through a mock game.

VG: Is there a difference in the level of nervousness between that first season and now?

Nicole: Before I do every hit, I still get a little jittery. But for me, those are good. They give me energy to do the job. Once they go away, I think it means I don't care, so I'm glad I still have them.

Nicole: I work at American Greetings as a marketing manager full time. I work on a brand called Photoworks where users can upload digital pictures onto hardbound cover books mousepads, coffe mugs, etc.

VG: And you also sing, so you're basically a Renaissance woman.

Nicole: I do a bunch of random stuff. I do the spots for Mr. Hero, I also host a show on Time Warner called "Helping Hands" where we highlight area non-profit groups. I'm also getting involved in producing since I have a writing background.