IS IT A LEAP YEAR? CONNIE SCHULTZ KEEPS JUMPING TO CONCLUSIONS

We're beginning to see a pattern. Last week, Plain Dealer columnist Connie Schultz chided readers who'd complained about the paper's relentless coverage of the Imperial Avenue serial killer, suggesting they were too sheltered, rich and white to have a point. This week she took a gratuitous swipe at John Tidyman's new book, Gimme Rewrite Sweetheart: Tales From the Last Glory Days of Cleveland Newspapers—Told By The Men and Women Who Reported the News. 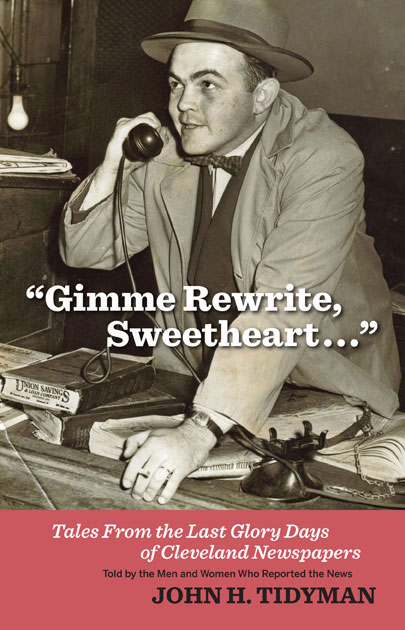 It started with this Facebook status post: "Why do I think Cleveland's women journalists will not have a starring role. The title, maybe?"

Some of Schultz's Facebook friends weighed in to set the record straight. "I really think you are being unfair, Connie. You are literally judging a book by its cover, even though its cover — or title — is faithful to the lexicon of the old days in this biz."

Another: "C'mon now, Connie. . .let's not be too sensitive here... the Tidyman name is synonymous with Cleveland journalism, particularly the Cleveland Press in the 60s and 70s."

Another: "There is an entire section devoted to women journalists, and many are quoted in all other sections. It is truely a fun read."

And another: "The title is a take off on the famous poster from More! magazine in the 1970s, "Hello Sweetheart, Get Me Rewrite!" In the 80s, it was updated to female and male versions of a '40s reporter on the phone."

Schultz returned to note that someone had forwarded her FB post to Tidyman ("Feel free, by the way, to let me know who you were") and that he'd emailed her a response. She posted it in full; we're skipping to the most relevant part:

Between the covers [of the book] are stories from: Barb Weiss, Helen Moise, Harriet Peters, Teddi Gibson-Bianchi, Doris O'Donnell, Dianna McNees, Marge Alge, Rusty Brown, Alana Baranick, and Zina Vishnesvky. More than once I tried to talk Betty Klaric into an interview, but she said no. I regret that because Betty was one of journalism's first environmental writers.

My book is what I call an informal oral history. My last book, "Cleveland Cops: The Real Stories They Tell Each Other," was similar in editorial design. I tell you that because no one has a 'starring role.' With both books, I presented intimate looks at important Cleveland institutions.

Far be it from me to make any reading suggestions to you. Let me suggest, however, what you not read. Don't read my book. Don't buy it, borrow it, or take it out of the library. That way, you won't feel obligated to broadcast on Facebook a half-ass insult about a book you haven't even read.

Oh snap! as the kids say.

Schultz then tried to justify her initial slam: "Thanks to all who offered their perspectives here, especially in pointing out the number of women who are featured in the book. I do think we're entitled to our opinions about book titles. They are, by design, meant to inspire reactions. My reaction was the question I posed."

So, Mr. Tidyman, we hope you've learned your lesson. Next time you plan to write a book whose title invokes antiquated attitudes toward women, you might want to run it by the author of … And His Lovely Wife first. — Frank Lewis