Federal officials say an old mustard gas pit poses no health risks. Others aren't so sure. 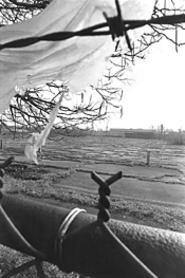 Walter Novak
The Corps says the pit lies beneath a vacant lot at East 131st and Taft.
A worker in the Allied Carpet Inc. warehouse grabs his right elbow in mock pain. "Ohh," he moans. "Mustard gas."

Company President Mike Suppo pushes him away with a smile and says, "Get outta here." But once the employee walks out of earshot, Suppo turns serious.

Not long ago, officials with the U.S. Army Corps of Engineers swept through the building, which in 1918 housed a starkly different enterprise. Known then as the Cleveland Plant, it served as a World War I production facility for the chemical agent mustard.

Corps investigators, armed with archival photographs and documents, combed the warehouse at East 131st and Taft Avenue to pinpoint where plant workers disposed of chemicals. They concluded that a mustard gas burial pit was dug on the south side of Taft, across from the building, under what is now a vacant parking lot.

Suppo isn't so sure. "If you look at those photographs, it looks to me like they poured stuff into the ground right over there," he says, pointing to the northeast corner of his warehouse. "Why are they saying it's buried across the street? I don't know."

Kevin Jasper, the Corps' project manager on the Cleveland Plant site, admits investigators "can't fully rule out" that toxins might lurk under Suppo's one-acre property. But based on the plant's old photos and documents, he says, they speculate that the nearby three-acre parking lot sits above most, if not all, of the chemical waste.

Corps researchers culled the archival materials from the Western Reserve Historical Society in the mid-1990s. The photos show soldiers in protective suits dumping barrels of liquid and bags of lime -- a mustard agent neutralizer -- into a trench. A caption scrawled under one picture reads "Burying mustard."

A photo of a pile of metal drums next to a two-story brick building -- now part of Allied Carpet -- causes Suppo the greatest concern. If barrels were stacked that close to the warehouse, he worries, waste also may have been dumped there.

The Corps, even as it began a geophysical survey of the burial pit earlier this month, recently approached Suppo about digging on his property if necessary. The request suggests that officials don't know precisely where the chemicals lie.

It wouldn't be the first time the Corps was wrong.

The agency bears the task of surveying and potentially cleaning up more than 9,000 Formerly Used Defense Sites, or FUDS, across the country, including 90 in Ohio. The testing gauges whether chemical weapons, munitions, and other war-related detritus dumped at the retired facilities pose a health hazard.

Hampered by its own blunders and incomplete disposal records -- or no records at all -- the Corps on occasion has made a mess of FUDS and similar cleanup projects:

" Federal officials knew as far back as 1986 about contaminated soil in a posh neighborhood of Washington, D.C., where a massive World War I chemical weapons testing base once stood. Yet a cleanup of Spring Valley didn't commence until the accidental discovery of chemical munitions in 1993. Two years later, the Corps and the Environmental Protection Agency pronounced the area safe.

Subsequent reviews showed the Corps botched its soil analysis and failed to alert residents to health risks. Reports of higher than normal levels of arsenic, a by-product of chemical weapons, brought the agency back for more soil excavation in 1999. As the cleanup continues, an investigation is under way to determine if a link exists between ground contaminants and residents dying from cancer and aplastic anemia.

" Three years ago in Brooksville, Florida, the Corps finished a $1.7 million cleanup of artillery shells and mustard gas dumped at the Hernando County airfield, formerly an Army training site. Last month, a construction crew stumbled upon a 1,000-pound bomb still buried there.

" The Corps oversaw cleanup of an old military outpost and testing site on Amchitka Island, about 1,600 miles southwest of Anchorage, in the mid-1980s. The Navy launched a follow-up effort in 1991. Earlier this year, studies of the area revealed that grenades and bomb casings, as well as PCB-contaminated sludge left over from atomic testing, remain in the area. Fears over toxins contaminating fish and waterfowl have prompted the Corps to lead another cleanup.

" Last fall, three workers who excavated bomb casings filled with mustard gas buried at an old defense depot in Memphis wound up hospitalized. The workers, employed by a Corps-approved contractor, complained of headaches, nausea, and skin irritation that doctors blamed on exposure to by-products created by the breakdown of sulfur mustard.

Agency officials waited almost a month to notify residents about the incident "because they did not perceive this to be an emergency," according to local officials.

The Cleveland Plant closed in late 1918 and housed various companies before Allied bought the building about a decade ago. Suppo knows of no health ailments among his workers that could be ascribed to mustard gas.

Jasper characterizes the risks to workers and residents in the surrounding neighborhood as "very limited."

Mustard gas, which can cause skin burns, blisters, and respiratory damage, breaks down within days into less harmful by-products when buried in soil, according to the federal Agency for Toxic Substances and Disease Registry. The presence of lime, the passing of 80-plus years, and the paving over of the burial pit further reduce the hazards, Jasper says. The gravest danger would result from intact containers of mustard in the soil, he says, "But that's not what the photos show us is there."

A higher than normal rate of leukemia has appeared among students who have attended the River Valley schools, past site of an Army depot. No cause for the illnesses has been established, but two whistle-blowers who worked on the cleanup accused the Corps of manipulating radiation test data in an attempt to clear the military.

"The community has a right to be skeptical when the Army Corps says something is safe," Ryder says.

Ward 10 Councilman Roosevelt Coats, whose district includes the Cleveland Plant site, gave voice to that skepticism at a Corps community meeting in October. "The Corps doesn't know what's there. They think they know," he says. "There are a lot of unanswered questions."

Residents echo the doubts. Karmen Waller, a 37-year-old mother of one, moved into a house last year on Arbor Road. If she had known then about the mustard pit two blocks away, she would have looked elsewhere.

"Do [Corps officials] really know how safe it is? It's hard to trust them," she says.

The Corps notified the public about the pit only last month, both because it needed time to conduct preliminary studies and because other cleanup sites held higher priority, Jasper says. Andre Wilson, who builds homes in the area, shakes his head at the rationale.

"I've been in the military, and I've seen how they lie. When you're talking about mustard gas, that's a concern. Somebody should have said something sooner."

The Corps will spend $1 million examining the site over the next two years. A cleanup that would again make the land suitable for industrial use would cost more money.

Chelm Properties, a Solon-based real estate firm, owns the vacant lot. Company officials have yet to tell the Corps whether they would develop the site if the waste is removed. (Keith Chelm, director of operations, did not respond to interview requests.) If the land is salvaged, chances are good that the Cleveland Plant will be added to the list of 19 cleanup "success stories" on the Corps' website.

Not surprisingly, there is no corresponding list of failures.