Is This Cleveland's Biggest Snowman? 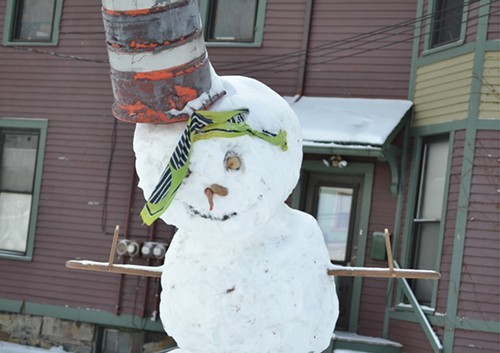 This snowman is big enough to use an orange traffic barrel as a hat. Well done.

Located in a yard on Abbey Ave, between West 19th and West 20th, this snowman recently popped up and we're extremely impressed. It won't be around forever, though, because it looks like gravity is starting to have its way. Check out our pictures below.

From the side, you can see its tilt:

Here's a closeup of the face. It's something you should definitely appreciate from a distance...

Doug Brown is a staff writer at Scene with a passion for public records laws and investigative reporting. A native of Ann Arbor, Mich., he has an M.A. in journalism from the Kent State University School of Journalism and Mass Communication and a B.A. in political science from Hiram College. Prior to joining Scene,...
Scroll to read more Cleveland News articles