It is What it Isn't: Frank Jackson Won't Rule Out Fifth Term, Offers Corrective on Infamous Quote 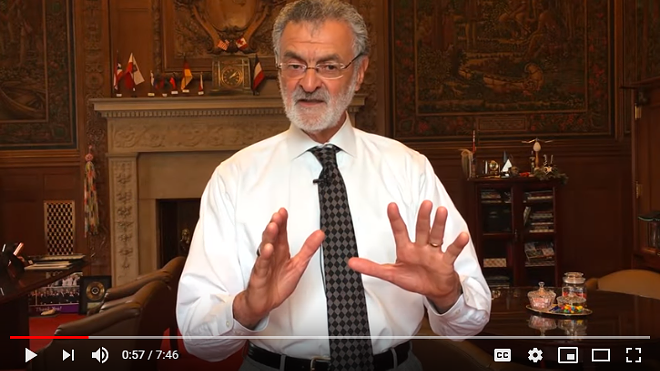 YouTube screenshot: City of Cleveland Office of Communications
Cleveland Mayor Frank Jackson would not rule out running for an unprecedented fifth four-year term in office Tuesday evening, during a conversation with WKYC 3 News' Russ Mitchell hosted by the Press Club of Cleveland.

Jackson provided no definitive answers on his intentions but confirmed that seeking office again was certainly a possibility. The 74-year-old Jackson, who first became councilman in Cleveland's Central neighborhood in 1990, has been Mayor since 2006. He's been in the role for so long that he now considers the job his to keep or bequeath — a Richard J. Daley dynamic.

Jackson said that in 2017 and in years past, candidates who challenged him haven't had Cleveland's best interests at heart. He believes he does. And he views the work he undertakes in his current position as an evolved form of the advocacy he did as an organizer and councilman. It's just that now, he works within a system that he has taken to calling "the beast," a system of power that has resulted in systemic racism and inequity.

Though he wouldn't endorse other potential candidates by name, Jackson did acknowledge that if he had not run in 2017, "qualified" candidates with track records of competence would have stepped forward. He said he believed the same situation would occur in 2021. But in general, Jackson adheres to the George Forbes theory of power: It's not given, it's snatched.

In his customary fashion, Jackson responded to questions about recent Cleveland events with absolute certitude in his performance. He would do nothing differently, he told Mitchell, with respect to his actions on the day of citywide protests on May 30 and the imposition of a downtown curfew in the days that followed.

He also said he had no regrets about his "butthole of the world" remark in a recent national interview and no regrets about promoting Michael McGrath from police chief to safety director in 2014, even after the police chase that resulted in the shooting deaths of Timothy Russell and Malissa Williams, (#137shots). He repeated the line that but for McGrath, there would have been no accountability at all in the Cleveland Division of Police.

Jackson spoke candidly and informally — his biggest challenge over the past couple of months has been "handling bullshit," he said — and declined to provide introspection on his legacy. He suggested doing so would be preemptive. He did provide a brief exegesis on one of his infamous quotes: "It is what it is."

The Mayor said that he's gotten flak for the remark over the years, but that it has been gravely misinterpreted.

"Most people believe what I mean is that there's nothing you can do about it," he said. "It is what it is, you have to just accept your fate. That's not what I mean. What I mean is that I have to accept reality no matter how painful it is. If I reject that reality and choose to live an illusion, than my decision making will be based on an illusion."

Only once you've accepted the painful reality, Jackson said, can you begin to change it.