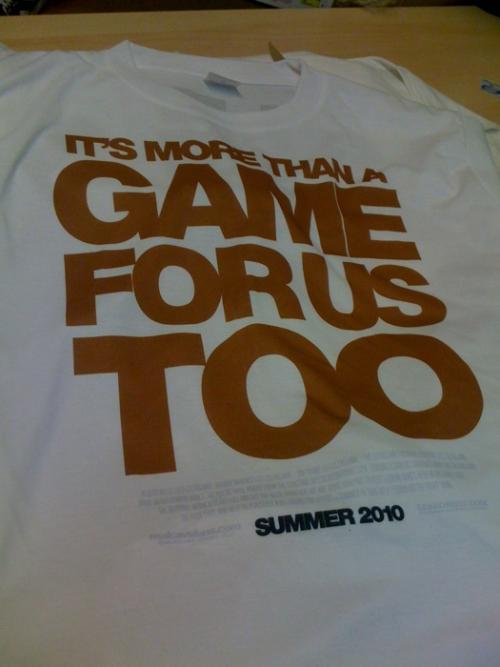 — Glen Infante of LeBron 2010, Real Cavs Fans, and I Love the Hype — or, most notably, the Delonte West t-shirts — posted new tee pics to his Twitter account today. "It's More Than a Game To Us Too" is the design, with mimicked film credits and debut date on the bottom. Don't know when they might be for sale, but they're pretty clever.

— John Krolik over at Cavs The Blog takes a look at J.J. Hickson:

For all of Hickson’s talents, he still has a lot of massive holes in his game at this stage of his career. And remember, his career-high is currently 14 points. He has a nice stroke on his shot, but only made 30% of his jumpers last season. He loved to take the ball right at the rim, and 60% of his shots came from “inside,” with a third of those being dunks, but his forays lacked nuance-a full quarter of his layup attempts were blocked. He got to the line a fair amount, but only shot his free throws at a 68% clip when he got there. His post game is often rushed and ugly, and his footwork can get careless around the basket. He’s not a passer.

But what keeps Hickson off the court more than anything else is his Gooden-like tendency to completely blow defensive rotations. In Mike Brown’s defensive system, which is based on sound show-and-recover defense from bigs out on the perimeter, defensive mental lapses are simply not forgiveable. Hickson has defensive talent; he’s probably the most talented shot-blocker on the team outside of LeBron, and has extremely light feet for a guy his size. But he needs to know where he is more often than he currently does if he wants to be in the rotation when the important games roll around.

— We have a soft spot for former Cav Lance Allred. We reviewed his stunning memoir here, and now we find out that, yes, Lance will be heading to Europe next season, as he didn't land on an NBA roster. Bad news. The good news, however, is that his manuscript on his second book — a historical fiction based on the Teutonic Knights of 14th century Europe.

— Kelly Dwyer over at Yahoo!'s Ball Don't Lie ranks the best teams of the last decade to not win a championship, and you could probably guess which squad takes the No. 1 spot.