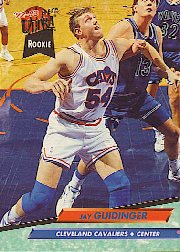 My best friend growing up was absolutely and bizarrely obsessed with Jay Guidinger. If you don't know who that is, don't worry, you are far from alone.

Guidinger played two seasons for the Cavs — 1992-1994 — which were his only two seasons in the NBA. He has 100 career total points (you can see his full stats here), which is a nice round number, and did so by averaging 1.6 points a game. That is workmanlike if I ever saw it.

Why that friend would pretend to be Jay Guidinger every time we played one-on-one in our driveways is beyond me. I think it's safe to say he might be the only guy ever to do that.