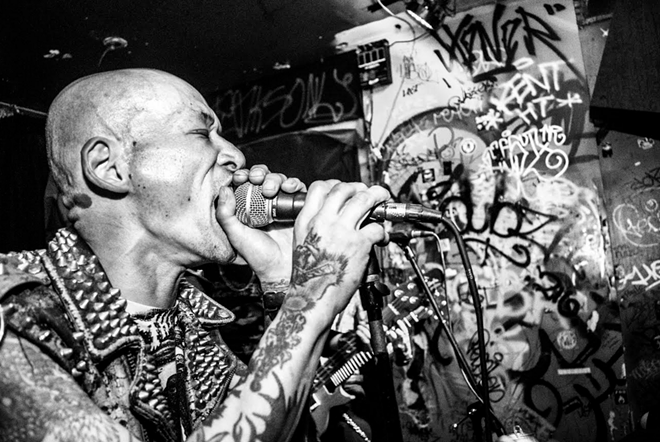 Justin Nelson
These days social media has become the new staple-ridden telephone pole on which bands and artists can promote themselves. And with the advances in cell phone technology, Instagram has become the new gateway meat into concert photography, which is why we found newcomer Justin Nelson’s exhibition at SPACE: ROCK interesting.

Among the myriad of Instagram accounts that hold us hostage with cats, selfies, and food (don‘t you judge me), Nelson’s account @capturedcounterculture hosts his photographic journey capturing and chronicling natural elements and urban exploration with his cell phone. A couple of years ago he graduated to a digital camera after much encouragement from family, friends, and other artists.

“(Now) I always have my camera on me at shows and when I go out. Plus I can make prints with a DSLR. You can’t really do that with a phone. So I ended up getting a Nikon D3300 at the end of 2015 and immediately started taking photos of my friend’s band in their bedroom. Up until very recently I only really used my D3300 and a kit lens. I just recently purchased a D750 and a Tamron 2-70mm f/2.8 lens, which I almost broke at the most recent Fuck You Pay Me/Face Value show at Now That’s Class.”

In regard to his musical tastes he continues, “I’ve been listening to punk for a little over two years now, I went to shows every now and then, mainly SoCal indie bands. Around seven months ago I started going to punk shows at least once a week, sometimes even three if there were bands I really liked. It was both the music and chaos that kept me coming back for more and the fact that most shows are only $5, so I wasn’t breaking the bank. As for my favorite bands to shoot, well there’s a lot but FYPM always puts on a great show and the crowd always goes nuts. Another really fun band to shoot is Weed Wacker, you gotta check them out. My favorite band to shoot and see in general is The Suicide Machines. Been into them for years. Jay is all about making the crowd riled up, which are the best shows in my opinion.”

Acquiring a solo exhibition is one part talent, three parts hustle, and the rest is luck. “I had bumped into Shawn Mishak, who coordinates the gallery exhibitions for Space Rock during the Rubber Mate show at Now That’s Class a couple of months ago.” Nelson recalls. “We talked about a show and then two weeks prior to the Walk All Over Waterloo festival, he messaged me about hanging my work and that’s how this solo exhibition happened.”

The title of the exhibition is “A Deeper Look into the Underbelly of Cle’s Punk Rock Community”, and the presentation of the “underbelly” of any genre or scene is subjective. My expectation when walking into the gallery was to witness more of a photo-documentary on our punk scene in general, but Nelson chooses to hone in on the live band experience and the natural reaction of its willing participants.

For being such a young photographer with no formal training whatsoever, Nelson demonstrates a natural eye for images and composition, exposing beauty in the seemingly ugly world of punk rock. Nelson muscles right up front and into the crowd, successfully farming some extremely gritty shots that make us feel like we are in the pit; grinding and moshing with everyone else. The photo of FYPM at the Grog Shop plops us directly behind the whirling cyclone of Cleveland’s best resource: the legendary Tony Erba. Then we swing around to find ourselves crowd surfing near the stage lip at The Foundry with Wavves fans, nearly getting chucked in the dome by some dude’s Vans. Next we are sweating right alongside the bassist from Wet Brains and freaking out with the ever bizarre, beekeeper-suited Bulsch at Now That’s Class.

In some respects, Nelson reveals where he is still green. It’s unfortunate that the show is very dude-heavy and whether that is a conscious choice or not may fall under artistic license. We would liked to have seen more inclusion of all female or female led punk bands. Certainly the estrogen must represent somewhere in this town. Perhaps next go-around. Also, these pieces really scream for an expanded format. It would be refreshing to see them poster sized or even life sized. Those items aside, it is always exciting to witness a young artist (Nelson is twenty-two) at the beginning of his/her career trajectory. Justin Nelson’s work definitely shows a lot of promise and we look forward to watching his photography develop and mature.