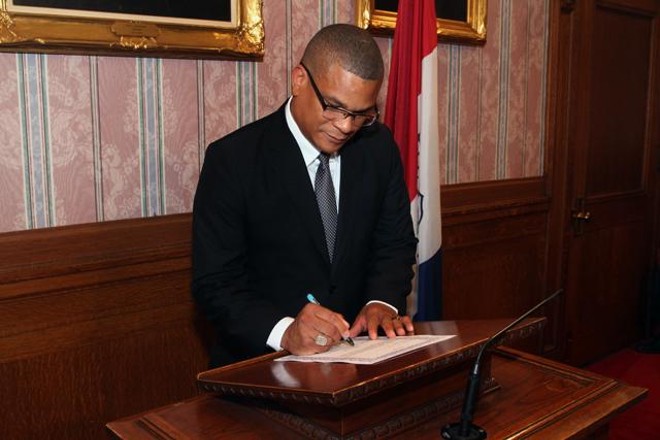 Cleveland Safety Director Karrie Howard and former Police Chief Calvin Williams were "on a mission" to inform the public about Issue 24, internal emails reveal. And while they purported to remain neutral in the debate, the information they marshalled and disseminated at community meetings through October represented a coordinated campaign to oppose the controversial ballot measure in the leadup to the Nov. 2 general election.

Issue 24 was the initiative to create a more powerful civilian commission with ultimate oversight in matters of police discipline. It passed overwhelmingly in November. Mayor Elect Justin Bibb supported the measure, which was launched by a local coalition called Citizens for a Safer Cleveland. Opposition from the Department of Public Safety was to be expected, as passage was interpreted as an affront to police autonomy. It was also opposed by Mayor Frank Jackson, mayoral challenger Kevin Kelley and the majority of Cleveland City Council, including Kerry McCormack, who endorsed Bibb.

According to October emails obtained by Scene via public records request, the police wanted to maintain an air of neutrality on Issue 24.

"Our goal is to inform, not persuade," Howard wrote in an Oct. 4 message to Calvin Williams and the commanders of Cleveland's five police districts, coordinating attendance and talking points at upcoming community meetings.

But the talking points Howard favored, and Howard's own language, demonstrated otherwise.

Howard's "mission" was set in motion in the aftermath of a Sept. 29 Cleveland City Council Safety Committee meeting. He had spoken with Paul Forsgren, the local man who founded Greater Cleveland Citizens for Public Safety to oppose Issue 24, as well as councilmen Blaine Griffin and Brian Kazy about "raising awareness in the community."

"With early voting in two weeks, we should begin putting this information into strategic sense to begin messaging next week," Howard wrote to Chief Williams and Frank Jackson's communications chief, Valarie McCall, on Oct. 1. Williams agreed, responding that getting the media involved was an important next step.

Howard promptly communicated to the district commanders, encouraging them to schedule and attend community meetings in the coming weeks to address safety concerns generally and Issue 24 in particular. He asked that calendars be shared so that either he or Calvin Williams could attend block clubs and safety meetings to advance the police message.

"We will not take a position [on Issue 24]," Howard wrote, "but will speak with an informative tone and intent."

The talking points he distributed to his commanders largely concerned the language of the charter amendment itself, highlighting fears that it would remove power from both elected officials and police leadership. Howard and Williams felt that these elements were not being communicated to voters.

From Oct. 1 email from Karrie Howard to Cleveland Police leadership.

Commanders followed up to share meeting dates as they were scheduled. Others asked questions about specific responses to community members. Commander Thomas Stacho, of the Second District, said it would be helpful to see material that the Issue 24 proponents were disseminating to establish a "frame of reference."

Commander Dorothy Todd, of the third district, sent Howard an email asking how to respond to Alan O'Connell, the President of the Downtown Cleveland Residents Association, who had shared a cleveland.com article with her and asked if she thought it fairly represented both sides of the Issue 24 debate. He wanted to distribute "neutral sources" to his organization's membership, he said.

In a response to Todd, Howard said that the article, written by City Hall reporter Bob Higgs and outlining the positions of supporters and opponents, provided "some info, but not enough of the truth."

The next day, Oct. 5, Todd responded to O'Connell expressing personal ambivalence about the cleveland.com article and sharing Director Howard's talking points. Additionally, she attached data showing declining use of force by the Cleveland Police.

Chief Calvin Williams, both in public and private, was keenly interested in promoting this data. He believed that the Division of Police's improvement under the consent decree was evidence that Issue 24 was unnecessary. The declining use of force and reduction in citizen complains was "an important narrative that the community needs to hear," Williams wrote in an email to Howard.

This was a narrative advanced by the Cleveland Police Patrolmen's Association as well. In a "No on Issue 24" mailer paid for by the CPPA, president Jeff Follmer penned a four-paragraph letter to residents, outlining the main points of opposition.

"Issue 24 is being sold as providing necessary oversight of a Division that lacks accountability and discipline," the mailer read. "Nothing could be further from the truth. During the past six years of reform under the Consent Decree, both accountability and discipline have reached all-time highs. The Office of Professional Standards and the Civilian Police Review Board have been transformed into an effective investigator of citizen complaints."

(That position is undercut by a recent report by the Consent Decree Monitor, Hassan Aden, which found "an overall, systemic failure" in the investigation of the police chase that resulted in Tamia Chappman's death.)

Follmer's letter concluded by saying he stood with "the Mayor, the Safety Director, the Chief and the council members with whom I have spoken against Issue 24."

Though the October emails Scene reviewed showed no direct coordination between the Department of Public Safety and Kevin Kelley's mayoral campaign, Steven Rys, Kelley's longtime operative and aide, does make an appearance. On Oct. 12, he sent an email to Howard asking to be sent a copy of the data that had been assembled in the aftermath of the Sept. 29 Safety Committee meeting.

On October 11, Howard and Commander Stacho attended a meeting of the Lincoln Heights block club in Tremont, held at the Tremont Taphouse. Howard took time at the beginning of the meeting to go over a flyer he'd brought, which hardly could be mistaken for a neutral document. It began like this:

Both the tone of the flyer and its anonymous authorship didn't sit well with some of the block club's members. Developer Josh Rosen, who couldn't attend the meeting but was sent a PDF of the flyer the following day, had a testy exchange with Commander Stacho — an exchange that was forwarded to Howard and police leadership — after he inquired into the authorship of the document.

"I have no idea who created that paper and I had not read it until a few hours ago. I have not studied it," Stacho wrote back to Rosen. "Is there anything in that document that is incorrect or misleading?"

Rosen said that he didn't know, only that he was skeptical of unsigned political literature and that much of the language sounded more like opinion than fact.

"I think if/when [the flyer] comes from a group like the police, assuming it did, it hits even worse since we should have complete trust in what they represent and be able to separate fact from opinion," Rosen wrote. "I think police are very entitled to their opinion—no different than me being entitled to mine—just that if it is going to be distributed, it should be signed and the author should be noted."

"Once again, I have no idea who authored that piece and it did not come from me or my office," Stacho responded. "I only read it today after it was handed to me at a separate meeting. I am sorry that you have decided that someone in the Division of Police authored that document. Clearly an agenda on your part."

Rosen told Scene that his suspicions weren't unfounded. He'd been informed by the block club president that Howard brought the handouts personally and went over their contents "paragraph by paragraph" during the meeting. The assumption by the attendees was that Howard himself was the author.

In fact, in an Oct. 13 email from Howard to Deputy Police Chief Joellen O'Niell, Howard says that the version of the one-pager distributed at the block club meeting was "given to me." It's unclear in the emails who gave it to Howard, but the safety director had previously sent the one-pager to Ward 7 Councilman Basheer Jones. It included the talking points he distributed to commanders on Oct. 1.  O'Niell had drafted another version to be distributed to district commanders for their use, but preferred the version Howard sent her.

"Yours is much better," O'Niell wrote.

"The citizens of Cleveland voted for and passed Issue 24. It is now part of the City’s Charter. My entire legal career has been dedicated to the rule of law and reform of the justice system, to include police reform. I remain dedicated to my obligation to uphold the law and carry out my duties in support of the Charter of the City of Cleveland. As the City’s Public Safety Director, I look forward to doing my part to advance the incoming administration’s vision for public safety and working with the new commission."