In a bizarre twist, a grieving father turns up dead. 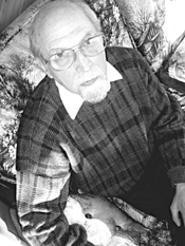 Kevin Hoffman
Mickey Mishne was still grieving his daughter's death when he was killed.
Merle "Mickey" Mishne was a man kept alive by passion -- for classic cars and more recently, for vengeance.

Last November, Mickey didn't have much time left. He was in his 70s and walked with the shambling gait of atrophied legs. His home smelled musty and was inhabited by a cat that was both deaf and blind. Mickey was grieving the murder of his daughter.

JoLynn was a typical teenage girl. She was chubby, with long, wavy hair, and liked her music loud. She loved her car -- a zippy, black Chevy Cavalier -- and often gave rides to friends. She also had a soft spot for strays.

One of the people she took in was a boy named Dustin Lynch. A skinny runaway, Lynch told her that he was from an abusive home. JoLynn fell for his story and convinced her father to let Dustin stay at their Montville Township home.

Less than two weeks later, Lynch bludgeoned JoLynn to death with a bedpost while she slept.

Confronted with the utter senselessness of the crime, Mickey came to believe that Lynch had been influenced by Grand Theft Auto III and launched a crusade against violent video games.

But Lynch rejected that ready defense and instead admitted that he was motivated by sheer bloodlust. He pleaded guilty to aggravated murder and was sentenced to life in prison ["Thrill Kill," December 10, 2003].

At the sentencing, JoLynn's mom, Laurie, who was estranged from Mickey, castigated Lynch. "Why would you murder my only child?" she asked. "You affected my life forever."

She promised Lynch that when he was eligible for parole, she and her family would be there to make sure he would never get out.

But less than six months later, Laurie stands accused of a remarkably similar crime. This time, the victim was Mickey.

Late last month, police found Mickey's body in a barn behind his home. They arrested Laurie and her boyfriend, Dan Johnson.

On the way to the courthouse, when asked by reporters if he had killed Mishne, Johnson reportedly said, "Yes, I did." Laurie pleaded not guilty.

Medina County sees only one or two homicides a year, so two killings within the same family raised eyebrows. "It's just highly unusual," says County Prosecutor Dean Holman. "I have not seen that before."

The similarities between the killings are even more eerie.

Like JoLynn, Mickey was killed by a hard blow to the head from a blunt weapon. "It could be any number of things, from a pipe to a wrench," says Coroner Neil Grabenstetter.

As with JoLynn's murder, the apparent getaway vehicle for Mickey's alleged killers was JoLynn's black Chevy. Lynch was found with the car at a restaurant just up the street. Laurie and Johnson were discovered at an East Side home with the car -- which carried the vanity plates "1 JOLYNN" -- parked in the driveway.

In both cases, the alleged killers were living with the victims at the time. According to a neighbor, Laurie and Johnson had been staying at Mickey's home for several weeks before Mickey's body was discovered. And Mickey's reaction to JoLynn's death provides insight into his own killing.

When Mickey found his daughter's body, he didn't suspect foul play at first. "I think a kid has committed suicide," he told a 911 operator. "There's been trauma here. Her mother moved away a month ago. She met her last night and had a fight with her."

It was only by the end of the call, when Mickey discovered the full extent of the carnage, that he came to realize his daughter had been murdered.

Now that Mickey has been killed, his references to a traumatic marriage seem strangely prescient.

It wasn't always that way. Mickey and Laurie were married in 1982. He had undergone a vasectomy after fathering children in a previous relationship. But Laurie, who had suffered several miscarriages, badly wanted a daughter, Mickey said. He had his surgery reversed, and they conceived JoLynn.

Mickey channeled his grief over her death into advocacy against violent games. He gave several interviews to local media and scored a small victory when he got a Wal-Mart to yank Grand Theft Auto from its shelves.

He seemed unwilling to accept that such an unassuming boy as Lynch could kill for no reason -- perhaps because Mickey felt a lingering guilt for having taken the boy into his home.

"We were giving him sanctuary," he said. "We were doing a biblical thing of being kind and good to someone that was in trouble."

Perhaps that also explains why he took in his estranged wife and her boyfriend.

Authorities aren't releasing many details about the crime. Sergeant Terry Grice, one of the investigating officers, says that it looked as if Mickey "was taken by surprise." Prosecutor Holman says that Laurie had a motive, but he won't disclose it.

Even the coroner, whose job inures him to death, is dumbfounded. "I don't have a feeling for what sense there might be in this," he says.

Six months before his death, Mickey received a letter that Lynch wrote him from prison. It included quotations from horror novelist Stephen Koontz, as well as odd sentences that seemed to Mickey to be some kind of magic spell.

"I believe he was trying to put a curse on me," Mickey said at the time. "The kid is nuts."

But Mickey's real curse may have been his willingness to share his home with those in need.