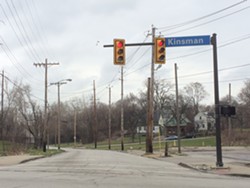 The incidents bring Cleveland's homicide tally to 30 so far this year. Of those, eight victims have been under the age of 20.

According to police, yesterday's shootings converged around 4:30 p.m., each within just a block or two of one another. Few additional details have been released.

The Sunday shootings follow a pair of incidents on Saturday, when a 61-year-old Cleveland State University adjunct professor was shot and killed nearby, on East 89th and Kinsman. Also on Saturday, a 15-year-old boy was shot and killed at East 79th and Woodland. The sequence of events and motives surrounding those shootings have not yet been divulged. Three men have been arrested in relation to the Saturday incidents.

According to Police Chief Calvin Williams, the Saturday and Sunday events may be linked. “We are heavily leaning toward there being some aspect of connectivity to Saturday’s and Sunday’s shootings,” he said. “We are asking for the public’s help. We want to stop this right now.”

He added that members of the Cleveland Peacemakers Alliance were in hospitals and in neighborhoods Sunday and today, reaching out to people with potential connections to the shootings.

Still, nearly one quarter into the year, the increasing number of data points, clustered mostly in and around Mt. Pleasant and surrounding neighborhoods, provides a foothold in another violent year in Cleveland and a chance to take stock of how the impending spring is shaping up.

Councilman Zack Reed remains one of the few local politicians who discusses the city's rising homicide rate with any frequency or clarity. He's introduced both legislation and opinion that demands more police officers (2,000 within three years, he's suggested), later hours for community recreation centers and, delving into the nitty-gritty of neighborhood relations, working streetlights on every corner.

ERIC SANDY / SCENE
A memorial for another man killed in the neighborhood in 2016 rests just up the road from Sunday's crime scenes.
He tells Scene that the numbers for the first 10 weeks of each year are only getting worse, tracking with the yearly totals. (We're entering Week 13 now, for context.) Nonetheless and even in the wake of the Department of Justice consent decree and the calls for community policing, the city has yet to turn its soaring homicide rate into a marquee legislative or executive issue.

As recently as last year, the resurrection of the "mini station" police policy — which in the past involved small satellite police stations in community centers — transformed into City Council histrionics. Mayoral candidate and City Councilman Jeff Johnson proposed this year a citywide mini station plan.

The emphasis on visibility and neighborhood policing is the key for Johnson and Reed, who have both routinely raised these arguments at council meetings for years.

"City Hall and the mayor's office have waited, in my opinion, too late to deal with this problem," Reed says. "This problem right now is spreading like wildfire."

Mayor Frank Jackson and Police Chief Calvin Williams held a press conference Monday afternoon, outlining the arrests behind the Saturday shootings and discussing on a more general level the investigations into gang activity and gun violence across Cleveland.

“We had the wherewithal to prevent these things from happening,” Williams said, referencing the officers standing nearby and lamenting the lack of information provided by neighbors on the ground in and around Kinsman. He urged family members and neighbors to call the police department with any information related to gun violence.

Jackson pointed to the flash mob and fights that erupted at the I-X Center over the weekend as an example of the police department’s Gang Impact Unit doing the sort of work that he finds vital to the city’s current plight. Three adults and two children were arrested at the I-X Center; Gang Impact Unit officials have intimated that, based on information, gun violence was imminent at the time they stepped and broke up the fight.

The city overhauled its gun ownership regulations in 2015, and Jackson on Monday pointed to those new laws as a step in the right direction. In 2017 so far, the police department has confiscated more than 200 guns. Still, he recognized the constraints on gun control in Ohio. “What we have available to us to do is very limited based on state law,” Jackson said.

As City Hall and many experts point out, the solution to neighborhood gun violence and gang activity will only come from a broad gamut of sources. Gun control is one oft-cited element, as Jackson and others pointed out this week, but there’s a network of community-based resources and technologies that will play a role in how Cleveland addresses this ongoing problem.

This morning, in the wake of the weekend shootings, Reed cited the Queensbridge Houses in New York City (the largest public housing development in the U.S.), which not too long ago celebrated 365 straight days without a single shooting. Among a spectrum of possible causes, local observers point to arts and cultural offerings, a robust security apparatus, after-school opportunities for children in the development and community partnerships with Cure Violence.

"This is what we need," he says. "It wouldn't stop [violence] if you put police on every corner. But you can stop it if you go into those communities and let people know that this is not normal."

This story was updated at 1:50 p.m. to reflect news and announcements from the mayor and police chief.