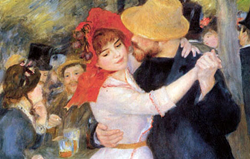 This week’s picks are a mix of one-off performances and series events — either involving classical guitars or trombones in one venue or multiple performances of the same program around the area.

Liza Grossman’s Contemporary Youth Orchestra has invited Melissa Etheridge to headline its annual “Rock the Orchestra” concert at Severance Hall on Wednesday, June 7 at 7:30 pm. The 115-piece orchestra and a 50-voice choir will treat listeners to some rarely-heard tracks from the singer’s multi-decade career. Tickets are available online.

Apollo’s Fire sheds its usual Baroque persona in favor of exploring dances and romances from the ancient world in “Mediterranean Roots,” a set of Countryside Concerts curated by Brian Kay and Amanda Powell. The first three of six performances take place at the Baroque Music Barn in Hunting Valley from Thursday evening, June 8 through Saturday evening, June 10. The show moves to Avon Lake UCC for a Sunday matinee on June 11, and to Geauga Lyric Theatre in Chardon that evening before winding up at Bath Church on Tuesday, June 13. Reserve your seats online.

The Cleveland International Classical Guitar Festival takes over the Cleveland Institute of Music the weekend of June 9-11 with lectures, master classes, and recitals on the docket. Performers include Jason Vieaux (Friday at 7:30 pm), lutenist Nigel North (Saturday at 3:00 pm), David Russell (Saturday at 8:00 pm), Hao Yang (Sunday at 2:30 pm), and the Davin-Levin Duo (Colin Davin, guitar and Emily Levin, harp, Sunday at 7:30 pm). You’ll need tickets for all the recitals except Yang’s, which is free. Pay at the door or reserve online.

It won’t be 76 trombones, but close to that number as Cleveland Orchestra assistant principal Shachar Israel welcomes colleagues and students to Cleveland State University for his annual Cleveland Trombone Seminar. In addition to classes and coachings, the week-long event includes recitals by faculty members in Drinko Hall. Israel performs first, on Saturday, June 10 at 1:00 pm, followed by Mark Lusk (Monday, June 12 at 6:00 pm), James Box (Tuesday, June 13 at 6:00 pm), Randall Hawes (Friday, June 16 at 6:00 pm), and Nitzan Haroz (Saturday, June 17 at 1:00 pm). On Sunday, June 18 at 1:00 pm, a final concert brings all the ‘bones together. Tickets are $15 at the door except for the final event, which is free.