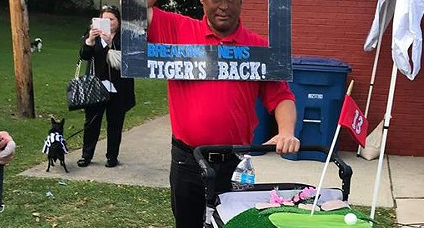 
One of the Cleveland area's most popular Halloween events of the year is the annual "Spooky Pooch" parade in Lakewood. For the seasonal festivities, owners and their furry friends dress in matching costumes for a panel of judges and walk in a parade for the community to enjoy.

This year, that included a ton of cute pups and dazzling costumes, and some dude in blackface.

It isn't clear how many people saw the costume, but the non-profit that hosts the event every year, LakewoodAlive, posted a since-removed video where, in the background, the man donning blackface makeup while dressed as Tiger Woods can be seen.

“This racist costume should never have been allowed in the event,” said Alison Meredith in a Facebook comment to organizers. She continued:

“The participant should have been stopped at registration, and when that failed should have been pulled from the parade at whatever point an organizer saw it, even at the risk of 'causing a scene'. The tepid response and shrugging off of responsibility are making a terrible situation much worse. You allowed a blatant and disgusting display of racism in your event that was advertised as being for the community. At the absolute least the community is owed an apology and a clear plan for future events that includes advertised guidelines and a firm zero tolerance of racist costumes, speech, actions, etc, and accountability from the organizers and event team that they will not allow something like this to happen to again.”


A few hours ago, almost a day later, LakewoodAlive posted their official response to the complaints, acknowledging that the man's participation should never have been allowed.
Commenters were nonetheless displeased that it seemed posts tagging LakewoodAlive were being deleted. Director Ian Andrews addressed that in a post attempting to explain.

That explanation leaves a lot to be desired.

Just a reminder: Don't wear blackface, for Halloween or ever.