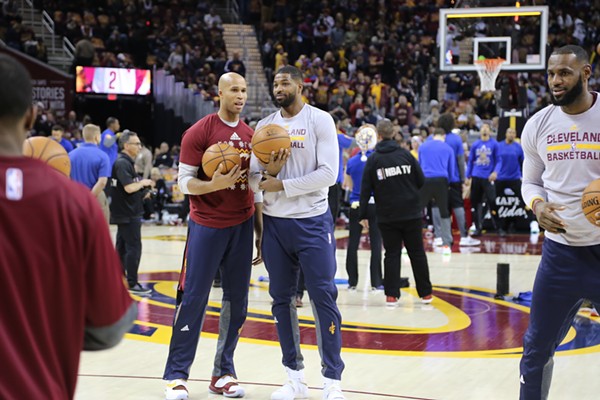 The Cavs fired head coach Tyronn Lue less than two weeks into the season, after coming into 2018 hot with six losses and zero wins, and apparently did so without knowing or possibly caring that their choice for the interim gig, Larry Drew, wouldn't accept the title without some concrete financial commitments from Dan Gilbert. Kevin Love, predictably, has suffered yet another injury that will leave him on the shelf for an extended period of time. J.R. Smith has poured all the energy he's saved by not playing basketball into pouting. The team is reportedly already shopping Kyle Korver in trade talks. And tickets for home games in this new LeBron-less era are going for as little as $2 on secondary markets.

There's a lot going on for an organization that probably counts as employees more people than who now actively follow or care about Cavs basketball.

Which is probably why the real important story of the young season, which saw its first victory last night, has flown under the radar: That 0-6 start has had some serious effects on the relationship of Tristan Thompson and Khloe Kardashian.

That's according to Hollywood Life, which picked up a thread ignored by all the beat writers in Cleveland.

“Tristan is going through a bit of a tailspin because the Cavs are really bad,” the insider tells HollywoodLife EXCLUSIVELY. “They fired their [head] coach [Tyronn Lue]. Kevin Love, their best player, is injured and will be out for a long time, and they haven’t won a single game. Tristan’s livelihood is through basketball and none of that is working out right now and he is taking his bad mood home with him.”

“It is absolutely putting a strain on his relationship with Khloe,” the source claims. “It just feels for Tristan that a lot of things are currently falling apart and should be so much better. Khloe has tried to reiterate that things will get better, but Tristan is in a different mind frame and it is putting some stress on his personal life. If the Cavs’ woes continue, it will most likely continue the woes at home and with Khloe.”


Here we thought that any relationship issues the duo were going through stemmed from serial infidelity and/or the stresses of a long-distance relationship involving a famous basketball player and an internationally famous reality star from an uber-famous family, but we were wrong. It's really being complicated by a reality check that Tristan's now digesting after somehow waltzing into the season unaware of what happened in July.

Our best wishes to the couple during this difficult time.