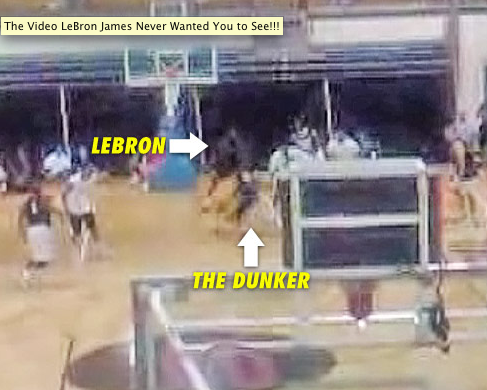 TMZ.com — the gossip news site that broke Michael Jackson's death —
claims it has the supressed footage of LeBron being dunked upon. TMZ says it will post the footage today at 6:45
EST. — D.X. Ferris

UPDATE: Thanks to Deadspin, we now have some particulars on how they bought it (there was a third cameraman), for what price (?), and what a let down the dunk will be (very).

Yes. Purchased it. Because despite Nike's best efforts to keep this thing under wraps, another amateur videographer smart enough to not hand it over has been shopping it for weeks when it became apparent the world wanted to Witness.

And, according to one individual who saw the video, once it airs tonight and begins making its way around the web, smudged with the ugly TMZ watermark, it's going to, in this person's words, "make LeBron look even more of a bitch." Not because he gets posterized, but because how Lebron was actually "dunked on" was so surprisingly lame.