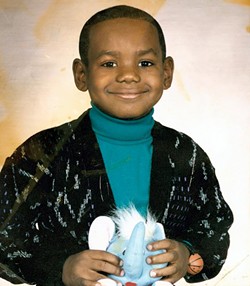 The King has yet to forget where he came from.
LeBron James has thrown the weight of his name and enormous influence behind Hillary Clinton.

In an endorsement op-ed provided exclusively to Business Insider and re-printed in Monday's Akron Beacon-Journal, LeBron said that Hillary was the only candidate who would support policies and ideas to support children living in poverty.

LeBron cited the ongoing work of his family foundation as one of the two goals he set for himself when he returned to Cleveland in 2014. (He accomplished the first last year, when the Cavaliers defeated the Golden State Warriors, after being down 3 games to 1, to win the NBA Championship. It was the first time any team had won the Finals after being down 3-1.) LeBron said that Hillary was the candidate who understood the plight of children who needed support networks and opportunities — children like LeBron once was — in order to succeed.

In addition to his foundation's work, LeBron recognized Hillary's capacity (and eagerness) to bridge racial divides.

"We need a president who brings us together and keeps us unified," he said.

The superstar from Akron, like Obama before him, encouraged everyone to register to vote and "show up to the polls" for Hillary. Here's the explanation, in his own words, of why he's supporting the Democratic nominee:

I support Hillary because she will build on the legacy of my good friend, President Barack Obama. I believe in what President Obama has done for our country and support her commitment to continuing that legacy.

Like my foundation, Hillary has always been a champion for children and their futures. For over 40 years, she’s been working to improve public schools, expand access to health care, support children’s hospitals, and so much more.

She wants to make sure kids have access to a good education, no matter what zip code they live in. She’ll rebuild schools that are falling apart and put more money into computer science. She’ll make sure teachers are paid what they deserve so they can give everything to their students.

She also has plans to make college a reality for more people in America, especially for those who can’t afford it. My kids in Akron are proof of the hope and motivation that come from knowing college can be in their future, no matter what obstacles they might be facing.

Finally, we must address the violence, of every kind, the African-American community is experiencing in our streets and seeing on our TVs. I believe rebuilding our communities by focusing on at-risk children is a significant part of the solution. However, I am not a politician, I don’t know everything it will take finally to end the violence. But I do know we need a president who brings us together and keeps us unified. Policies and ideas that divide us more are not the solution. We must all stand together — no matter where we are from or the color of our skin. And Hillary is running on the message of hope and unity that we need.