LeBron on Trump's Immigration Orders: They "Don't Represent What the United States Is All About" 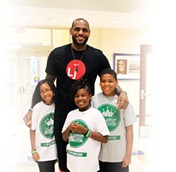 Courtesy LeBron James Family Foundation
Speaking to The Hollywood Reporter in the aftermath of receiving the NAACP's Jackie Robinson Award (given in person on Feb. 1 at the Q; part of the NAACP's Image Awards broadcast on Feb. 11) LeBron James discussed Donald Trump's immigration orders, advocating generally for peaceful demonstrations and saying specifically that he doesn't support the policies.

"Diversity is what makes this country so great," says James, who was raised by a single mother in an Akron housing project. "We should all continue to speak up and fight for ideas that bring people together regardless of race, gender, ethnicity, religious beliefs or any other differences." The NBA is a global league; every team has at least one international player, with more than 35 countries represented and many Muslim-American players. And the league has been comparatively outspoken on social issues, initiating in December 2015 a campaign against gun violence. "It's important that we as athletes continue to use the platform we have to speak up for what we believe in," says James.

As protests continue to rage over President Trump's ban on immigrants and refugees from seven predominantly Muslim countries, James has calibrated his message to encourage peaceful dissent through free speech. "I am not in favor of this policy or any policy that divides and excludes people," he says. "I stand with the many, many Americans who believe this does not represent what the United States is all about. And we should continue to speak out about it."

James hasn't been the most outspoken athlete on social and political issues — after a Cuyahoga County grand jury declined to indict the officers who shot and killed Tamir Rice, he told reporters he didn't know enough about the situation to offer an opinion — but he has picked his spots. At the ESPYs, for example, LeBron, along with Chris Paul, Dwyane Wade and Carmelo Anthony, implored athletes to use their influence and stature to speak out on issues of violence, particularly against African Americans. And prior to a game in 2014, LeBron and other wore "I Can't Breathe" shirts in honor of Eric Garner, who died at the hands of police officers in New York.