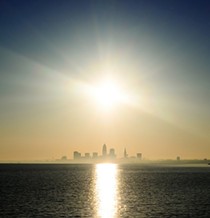 ERIK DROST/FLICKR CREATIVE COMMONS
Cuyahoga County Council today will discuss and possibly vote on another portion of the contract plans for a pedestrian/bicycle bridge that would connect the Malls with the lakefront. Earlier this summer, the county selected bridge architect Miguel Rosales (of Boston) and the Parsons Brinckerhoff engineering firm for this $25- to $40-million project. Up for talks today is the $2,808,412 to be awarded to Parsons Brinckerhoff for design work.

Being sure to cast a nod toward other county-funded goodies, County Executive Ed FitzGerald said, "Linking downtown to the lakefront has long been a goal for policymakers in Cleveland, and I am confident that, as with the Cleveland Convention Center and the Global Center for Health Innovation, we will complete this important project on time and under budget,” he said. "On time," of course, refers to the impending 2016 Republican National Convention, the current horizon for all in-progress construction and marketing hype.

In truth, though, the pedestrian bridge is a no-brainer — and a good long time coming. With the region's collective hard-on for talking about lakefront development, this bridge at least provides a rather significant first leap toward majesty. It goes without saying that county leaders should definitely strike while the iron is hot, before interest and/r funding disappear. Not like that's ever happened before...

Crain's gets to the gist with this paragraph:


They have struggled to put together financing for the bridge. Several attempts at federal funding have been rebuffed. But the spur of the Republican convention and the recently announced plans for Public Square have pushed the project forward.

With the promise of Republican money, all things are indeed possible.