Let Us Reiterate: No One Will Ever Touch LeBron in this Statistical Category 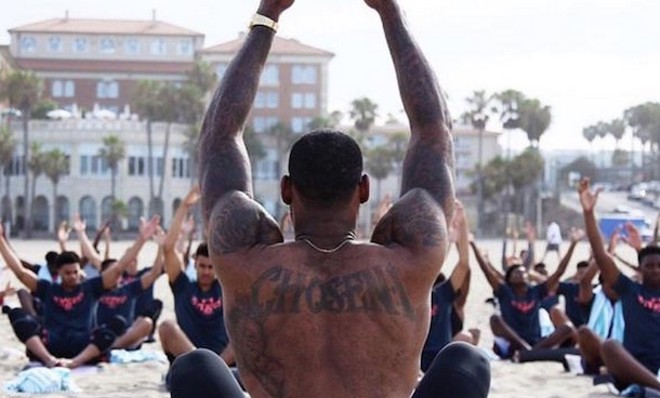 Instagram
LEBRON BEACH YOGA.
Exactly one year ago today, we wrote that of all LeBron James' stratospheric statistical achievements — among other things, he is now the only player ever to have accumulated 30,000 points, 8,000 rebounds and 8,000 assists — his "Player of the Month" achievements might be his most unassailable.

Perhaps more than any other category, this subjective designation handed down by the league each month demonstrates the length and height of his so-called "prime." As of last March 2, he had been named Player of the Month 34 times, far and away the most by any player since the award was first handed out, during the 1979-1980 season.

The Golden State Warriors' Kevin Durant, with 14 Player of the Month honors, was second among active players at the time (and still is). Only Michael Jordan (16) and Kobe Bryant (17) have more than Durant.

LeBron was named Eastern Conference Player of the Month yesterday, for his achievements during the month of February. It was the third time this season he has been so named, bringing his total to 37. The Toronto Raptors' DeMar DeRozan is the only other play in the Eastern Conference to receive Player of the Month honors in the last calendar year, for his work in January.

We wrote last year that Michael Jordan retired before the Player of the Month was awarded to a player from each conference, and that there were more than 20 months from the first time MJ won a Player of the Month award, (Nov., 1986), to the last, (Mar., 1998), when a player from the Western conference took home the league honors (excluding the '93-'94 season and all but the last two months of the '94-'95 season) where Jordan had the best odds of winning the award in the East.

But no player has been as dominant as LeBron for as long. He won his first player of the month award in Nov., 2004, his second year in the league. In every year since, save one, he has been named Player of the Month at least twice.

In the Western Conference, New Orleans Pelicans big man Anthony Davis was named Player of the Month for the first time ever yesterday. Davis is a monster in his sixth season, who has been an All-Star five straight years and has averaged better than 20 points, 10 rebounds and 2 blocks each of the last five seasons.

That Davis hasn't achieved Player of the Month honors until now speaks both to the overall quality of the Pelicans (they've struggled) and to the much stiffer competition in the Western Conference. Over the last five seasons, the W.C. Player of the Month honors have been largely commandeered by four players: Kevin Durant (7), Stephen Curry (6), Russell Westbrook (6), and James Harden (5). Portland's Damian Lillard, the former Clipper Chris Paul and former Clipper Blake Griffin each received the honor once.

Put any of the above players in the East and LeBron's total would surely have dipped. The only players from the E.C. to have been named Player of the Month more than once during that span have been DeMar DeRozan (3), former Pacer Paul George (3); John Wall (2); and Al Jefferson (2), who had an incredible season with the Charlotte Bobcats in 2013-2014. Looking ahead, LeBron's toughest competition for future monthly honors is likely the Bucks' star Giannis Antetokounmpo, former teammate Kyrie Irving and young guns like the Pacers' Victor Oladipo and the Sixers' studs Joel Embiid and Ben Simmons. And don't sleep on Delly.

No other Cavalier has ever been named a Player of the Month, although Larry Nance was the NBA's top player in December, 1987. He played for Phoenix at the time, but would join the Cavs later that season.