Letters to the Editor

Send a News Tip
Titan A.E. are the Drej 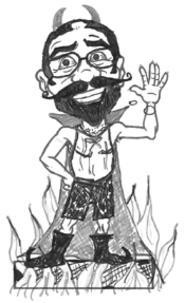 The Devil in Mike White

Gifted reader V.M.D. of North Royalton offers this rendering in response to "A Question of Style," in the June 1 issue of Scene: Plenty Mayoral Ass-Kissing Left

Eric Brewer's "white-man-keep-black-man-down" analogies in reference to why Mike White is still mayor [Letters, June 8] are not only ignorant, but they're racist and incredibly naive and shortsighted. "White male democratic U.S. senators" didn't say "pubic hairs and Long Dong Silver" in regard to Clarence Thomas -- Anita Hill did. Last I saw, she was a black woman.

The Other Vietnam Conflict

I am writing to commend Keith Joseph on the recent review of the Cleveland Play House's production of Touch the Names: Letters to the Vietnam Veterans Memorial [May 25]. I think he really hit the nail on the head -- this way overhyped production reminded me of a boring high school assembly. It exploits our sympathy for the families of the deceased soldiers in a sticky, overly sentimental way that is ultimately insulting to both the families and American society in general.

It is cowardly to milk this kind of weepy sentimentality but never deal with the "why?" of how Vietnam differs from WWII or other conflicts. The central issue -- that these young men's lives were thrown away in an illegal, pointless conflict that accomplished nothing -- is never really dealt with.

My two tickets to this production cost $39 each, plus a handling charge, plus $6-7 to park in a parking lot that is apparently owned by the Play House, for a cost of well over $90. This was for a play that barely lasted an hour and represented the kind of overall quality one might expect to find in a college production. Above everything else, this was a total rip-off.

Bad Food at a Great Price

I have just finished reading a full page of scathing abuse disguised as critical review authored by someone named Elaine T. Cicora ["Dark Days in Tangier," May 25]. It seemed that Ms. Cicora was more intent upon impressing the reader with her skillful use of the English language and culinary knowledge than preparing a straightforward critique of the chosen establishment.

The unfortunate recipient of this linguistic lambasting was an old familiar structure with the name Tangier. In today's world of high-tech and continental cuisine, Ms. Cicora chose to forgo nostalgia and unfairly compare Tangier with the high-gloss gastronomical theme parks that vie for our dining dollar. I would guess that Ms. Cicora is of a younger generation and was not parading her penful prowess when Tangier was the place to be.

Renowned throughout the '60s, '70s, and '80s for first-class food and entertainment, Tangier was host to the pioneers of rock and roll, R&B, Motown, modern jazz, and heavy metal. The fact that Tangier is still promoting the intimate side of the entertainment business with erstwhile talented performers in the Cabaret Room speaks highly of owner Ed George's commitment to Tangier tradition. The fact that Tangier has not exactly raced into the 21st century is obvious, but it seems quite inappropriate for Ms. Cicora to kick the old lady when she's down.

As recently as two weeks ago, I journeyed from Pittsburgh to spend an evening at Tangier. I will be the first to admit that the buffet was not bountiful and the service not quite sufficient, but the atmosphere was absolutely inspiring and the entertainment extremely energizing, and for the modest price of $45 for dinner and show, I felt that I received good value for my money.

Plans are under way to revive the aging Tangier and restore it to its former glory. It would be appropriate then for Ms. Cicora to eat her words.

Elaine T. Cicora's response: My job is to inform readers of what they can expect to find on their plates once they lay down their hard-earned dining dollars. Although you certainly aren't the first to admit the buffet was "not bountiful" and the service "not quite sufficient" (I beat you to it, didn't I?), it seems we are essentially in agreement about the quality of the dining experience. Frankly, no matter how cheap it is -- or what types of tunes you set it to -- a poorly prepared meal is never a bargain.