Lewis Black, Who Performs at Hilarities Next Week, Explains How His 'Rantcast' Got Him Through the COVID Shutdown 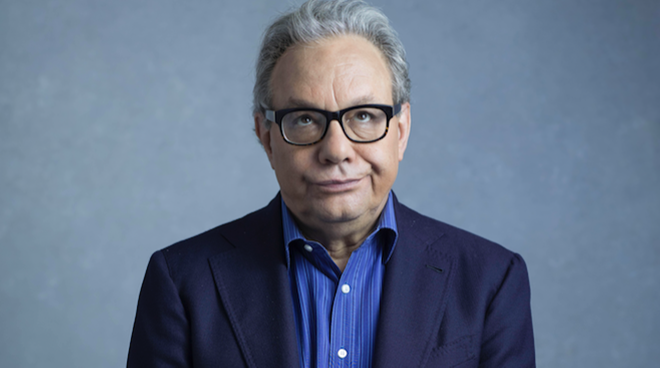 Courtesy of Eve Sadof
Comedian Lewis Black.
Veteran comic Lewis Black likes his comedy to have a political edge. As he puts it, he prefers to discuss “topics that include current events, social media, politics and anything else that exposes the hypocrisy and madness in the world.”

In a recent phone interview, Lewis Black, who performs on Sept. 16, 17, 18 and 19 at Hilarities, spoke about his approach to standup and talked about the things that helped him get through last year's pandemic shutdown.

You and I have at least one thing in common. We both cherish the National Comedy Center. I saw you there over the summer, mingling with the good people of Jamestown.
It’s tremendous. It might be the only thing I’ve been involved with where they set out to do something and did what they set out to do. I’ve tried to work with theaters and help them. Theaters take a left turn. This thing stuck to it. The people involved know the community, and it wasn’t a bunch of carpetbaggers coming in from somewhere else trying to make a buck.

I like the fact that it treats comedy as an art.
That was my feeling. I’ve had arguments with people about it. There are certain things about comedy that are like doing a bullshit magic trick. Ninety percent of it is really a craft.

Have you been able to work on new material during the pandemic?
I didn’t do anything. Did I read? No. I found it difficult to do any reading. Until my manager started saying that I could do this “rantcast” thing, it was really a desert. The idea of Zoom comedy was not fun. A lot of what I was watching was appalling. I couldn’t find a framework to make any joke. I keep saying it’s hard to satirize what is already satiric. [Trump] undermined the doctors from the beginning. He comes out there and starts saying these things. When he started saying those things, if the broadcast had used a laugh track, it would have helped. People were taking what he was saying way too seriously. It was like watching a hurricane coming straight at you and going, “What do you mean, get off the beach?” The hurricane is 15-feet from the shore. The lifeguard, who is your leader, is going, “Where are you all going?” when people start to run.

Did you get any writing done?
No. I got no writing done. I thought I might write a book. [The pandemic] threw off a lot of things I would’ve done that summer. I have to see where I am after this, and where we are. You add all this other stuff, and there’s a revolution at hand and we need to get our shit together in terms of how we treat each other. That’s working out well. A lot of it hung me up. Then, there’d be something on the news, and someone started a new life and had a whole new career. All their sister wives have set up looms are making thousands of objects that we’re selling online, and Etsy is booming. What the fuck? I’m not doing shit. People are tracking their lives, and I had nothing to track. The “rantcast” was a way for me to stay in touch with comedy. The last year I was on the road, the writing of the rants coming in was spectacular. These people were writing great. It had evolved into what I had hoped it would evolve into and became more than I imagined. They were writing on a level as strong as someone on The Daily Show. Could they do it consistently, no? Could they do it once? Yeah. They were getting stuff off their chest, and I was glad to share it. It’s the one thing I knew I didn’t need an audience for. I knew how to read a rant and make it funny and comment on it. Even if it wasn’t funny, I didn’t care because I had already established that. That kept me in touch with my funny bone, idiotic word that it is.

You went back on the road earlier this summer. What has that been like?
I only went and did one show. It was 500 days after I did after the final show that became the special. It was great to be on stage again and it was horrifying to work on it and get it to the point where I felt comfortable taking it out there. Everyone said, it’ll be fine once you get out there. [Comedian] Kathleen [Madigan] said it would surprise me, and she was right. I was going to do an hour, and she was doing 20-minute segments and had been out there doing it. What I found is that I had two major pieces from my old act that had dropped out of the show. Two of the pieces are ones that apply more now than when I was doing them. I’ll do them both in Cleveland.

Is it safe to call this time period post-Trump or is simply pre-Trump 2.0?
I don’t know. It’s impossible to say. What it really needs to be is science and facts 2.0. It’s really exhausting. If you put something out there like [Senator] Ron Johnson, who’s saying you can take whatever that de-wormer is, I believe that’s a criminal act. I think giving advice that is false — advice that your vet says is false — is something that we need to deal with. It has to be, “No this isn’t the truth.” Just because a scientist said it, it doesn’t mean there were trials for this.

The American public at large seems more prone to believe conspiracy now than at any other time in history. What is going on?
Because they’re at home alone. There’s no public square. They’re not confronted. Before there was a lockdown, they were given a signal in a sense by the former leader that you could bully and that that was a proper way to act, but it’s not. They’re showing up at these meetings about masking in schools, and they’re the minority. If you’re an adult, and you don’t want to mask, that’s fine. I think you’re putting my mother in danger, and I don’t care where you are in the country. It’s about the creation of this variant that has backfired on us. What is boils down to is that you have people going to these meetings about masking kids in school. You have governors saying you can’t mask the kids, which doesn’t help. You have to wait for the courts to make some sort of decision about it. These people show up at these local board meetings, and they’re the minority, and they’re yelling. You have to say to them, “No. This is not the way we conduct ourselves. You can’t intimidate these people and you have to leave.” To watch certain things occurring where these people were screaming. No. If you want to protest, yes. We need to get back to civility, whether they like it or not. What has destroyed that civility is that we talk to each other on a variety of social media platforms that allow us to say whatever we want without having to see the person and look at them and say that to them. The only thing that’s left if what you think. If you don’t think what I think, “Fuck you.”

What will the show in Cleveland be like?
I’ve got the stuff that I might have done in Cleveland before, but I guarantee that people don’t remember. I’m going to be working on my act. You might be watching someone whose career is ending right before your eyes. If you’ve been watching my career this whole time, you get to see the whole arc of it. Basically, I’m going to go through what I went through what I went through during the pandemic, which will line up with what a lot of other people went through. When I was talking about it with a really large audience, they got it. And you’ll hear whatever else I come up in the next few weeks. God knows, they’ll continue to give me stuff.