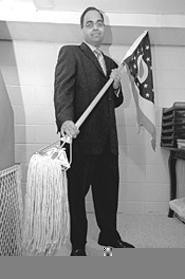 Walter Novak
Subodh Chandra wants to mop up corruption in Columbus. Will you let him?
He wears the requisite navy blue suit, American flag lapel pin, and businessman hair with the first intrusions of gray. Yet there is something odd about this man. His tongue wields the King's English with precision. His hands fold primly. Yet he plots to slay the thieves in Columbus. He offers to lead the revolt himself.

You shouldn't trust him. You've seen this guy before. Same suit, same earnestness, same Ivy League tattoos on the résumé. They are the New Democrats. They say big things. Think big thoughts. Sometimes they hold press conferences on the steps of City Hall, soberly addressing the outcry of the day, employing fighting words no fighting man would ever use. Then they retire to a sensible vegetarian potluck and extol their clever turns of phrase.

God has put them on this earth to get their ass kicked. It's their role in the ecosystem.

But this guy, he's got it worse. He is, in his own words, "a little brown man." His name is Subodh Chandra, which sure as hell don't come from Europe. And he's running for attorney general in a state with a fondness for big white rubes. Job description: Whore out your office, try not to get indicted, praise Jesus.

But here's the rub: He may be the best hope for Ohio's resurrection.

When Chandra became Cleveland's law director following the corrupt monarchy of Mike White, the place was a shambles. If you'd ever watched an episode of Law & Order, you could get a job here. The department was little more than a revenue generator for White's campaigns. Big firms kicked money to White; the law department kicked back handsome contracts.

Suddenly, lawyers were inviting Chandra to their stadium suites. He knew that it wasn't because of his "dazzling personality." And like everyone else in City Hall and the Statehouse, he could have ridden that train. For the young and ambitious, lawyer money can take you big places.

Instead, Chandra shut it all down. He slashed outside contracts by 90 percent. Started hunting polluters, corrupt city inspectors and purchasing officers. He built a name as a straitlaced hitter, which attracted better people. Suddenly, the law department was no longer a refuge for the unemployable; it was banging on behalf of Cleveland.

Now Chandra wants to take his show to Columbus. His immodest goal: to turn the attorney general's office into the "greatest public-interest law firm in the country."

It's a curious thought. When it comes to protecting the public, our present attorney general, Jim Petro, is looser than a $5 whore. He's tried to stop cities from enacting predatory-lending laws, turned a blind eye to laughable workers'-comp investments, never bothered to investigate when the SEC warned that the state was paying inflated brokerage fees. And despite rampant corruption involving unbid sweetheart contracts, last week he handed out 123 of them, worth $19 million. Ninety-seven of them went to his campaign contributors.

"I bet if you asked the average Ohioan what their attorneys general have done for the last 12 years, they couldn't think of anything," says Chandra.

It's equally curious that we settle for this. This is a job where you can throw big punches. In New York, while the feds sit on their ass, Attorney General Eliot Spitzer has become a one-man wrecking crew on Wall Street, bringing reform to the stock market, insurance and mutual-fund industries. His method: Hunt the biggest game and take 'em down; everyone else gets the message.

Chandra wants to do the same in Ohio. We have much more corruption -- with much dumber guys practicing it. This is a hunter's paradise.

"They've been so immersed in a culture of corruption that they don't even see it," he says. "They accept politics as it is. They're concerned about the preservation of power, of trading jobs back and forth. They have no interest in doing the right thing."

Imagine what Ohio would be like, he says, if the attorney general constantly probed illegal campaign contributions, kickbacks on contracts, the selling of legislation. Imagine our economy without that unseen tax, that system of bribery that takes a chunk of every dollar, directly or indirectly, from everyone in the state.

Chandra can. He's ready to knock heads. The question is, will you let him?

So much works against him. He's a little brown man with a funny name. He's also a Democrat, from a party whose state apparatus is lazier than a city road crew. "I will never underestimate the capacity of the Democratic Party to self-destruct," he admits. And Chandra's a reformer, so he won't be getting money from the big law firms, since he's unwilling to kick back. "This means, from a fund-raising standpoint, I'm going to have some challenges."

To sell you, he repeatedly invokes Barack Obama, another brown man who found his way to the U.S. Senate from Illinois. But this is Ohio, a state controlled by the rednecks of Appalachia and Old Money Cincinnati, people whose minds were hermetically sealed in 1953. Subodh Chandra? Sounds like some kind of A-rab. Has he even come to Jesus?

Then again, these are very weird times. Each day's headlines from Columbus bring a new round of malfeasance, new lies, new sweetheart deals, new backpedaling. Our leaders are being exposed as not just thieves, but highly incompetent thieves. You can't even trust them to steal properly, much less help us put bread on our table.

In times like these, even the rednecks might consider a little brown man, especially one who's proven he doesn't whore, who's earned his bones, who's shown the balls to fight.

This we already know: The white boys in Columbus will only take. Let the little brown man seek our revenge.