Live from Trumbull Correctional: The Prison Bands Plugging in and Playing Live Behind Bars

The sorrowful blues of B.B. King's "The Thrill is Gone" isn't lost on anyone in the room as Vincent works his blue Fender Telecaster into a frenzy. Vincent's known as "Starter" to the other guys around here, and not just for his virtuosity on the guitar. He's also a sound engineer and music theory teacher and he's been doing this since it all started.

"You gotta be out of trouble for so long before you can be here," he says.

Vincent is talking about the Music With A Purpose program at Trumbull Correctional Institution, because Vincent is locked up here and he's not leaving anytime soon. With nearly a decade to go before he gets a shot at parole, Vincent joins dozens of other inmates here in pursuit of music. And rock 'n' roll.  And freedom of some limited, creative sort.

"This is the goal," he says. "This is the ultimate goal, to be able to come out here and play." 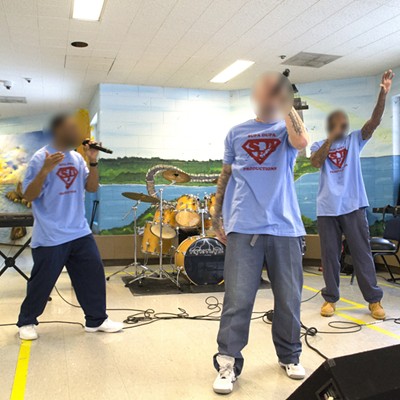 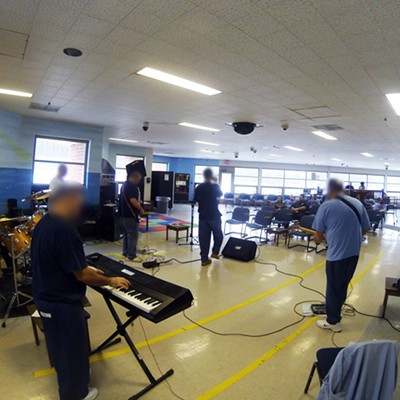 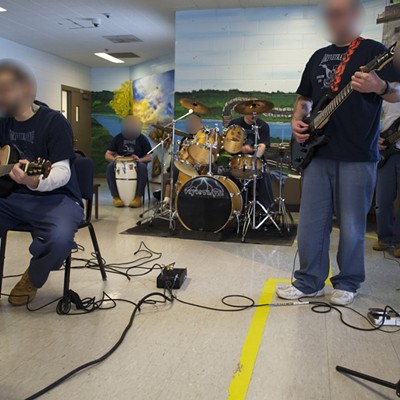 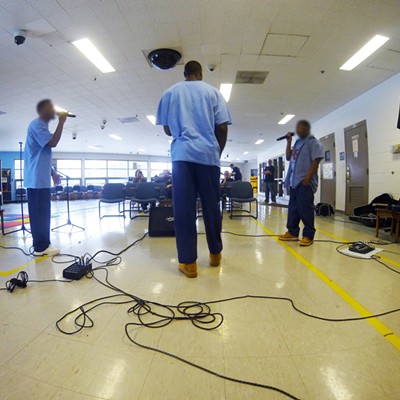 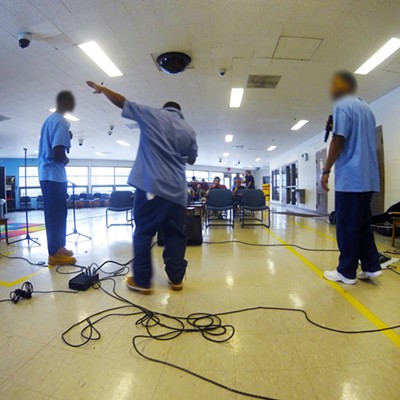 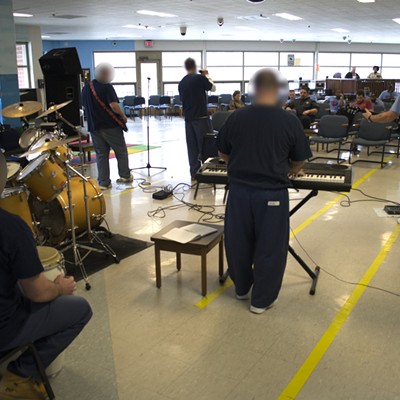 Trumbull Correctional Institution is a low-slung campus of imposing buildings, all spread out in beige on 130 acres of Leavittsburg soil in eastern Ohio. Surrounded by woods and the ranch-style homes that dot much of this part of the state, the prison cuts a grim, formidable profile across the land.

There's a colorful lighthouse scene painted onto the wall behind Vincent, but, otherwise, this a fairly beige room in a fairly beige prison in fairly beige Trumbull County, Ohio. For a couple of hours each week, that doesn't have to be the case.

Frost settles on errant leaves as a cold November morning curls around the prison, the barbed-wire fencing catching slight flurries that sprinkle to the ground. Inside, men shuffle across the yard. Winter breaths coil against tattooed necks and scraggled beards. The first shift of security detail eyes each passing soul with a familiar and detached nod.

A painted line of yellow footprints leads visitors from the entryway building toward the visitation rooms just inside the compound. For many inmates of Trumbull Correctional, this is where brief moments of magic alight behind prison walls. With only eight hours of visitation each month, though, that magic is fleeting.

In between those intersections with reality and the comfort of family, inmates play sports, read, pray, write, etc. Anything to push the focus elsewhere.

But for inmates who get along well during their stay at Trumbull and showcase good behavior, the state rewards them with access to artistic programming. For a select few of these convicts, idle hours are broken up with the opportunity to plug in and rock out. To play music. To sing.

Right now it is 8:30 a.m., which is the perfect time of day to go to a concert at a state prison.

Max stands tall in his S.D.P. T-shirt - homemade threads that sport a twist on the Superman logo - as he grips the microphone, occasionally tossing off a word and echoing the rhymes that his cohort, James, is spitting. Max is known as Supa Dupa around here. When the Music With A Purpose program got started in 2006, it was only natural that he set up a hip-hop crew and call it Supa Dupa Productions. S.D.P. one of the eight bands that practices and performs at Trumbull Correctional (and there are two more waiting to join the roster). Max, once and now forever a convicted murderer, is a rapper.

"I've been here since the program started," he says. "It's a good thing for rehabilitation. It keeps them out of trouble." He casts a nod toward the other guys who write and rap as part of S.D.P.: Zone, Mike, Mook Jonez, Boobie, Jay and James. (Because the state of Ohio did not approve the inmates for media attribution, Scene is only using first names or, in some cases, aliases.)

The group fluctuates now and then, bringing in new members when so desired and cutting albums that emote a common yearning for redemption. Max writes all the time. Likewise, his fellow rappers etch rhymes whenever possible. Zone, for instance, adds: "I always got a pen and a piece of paper on me. Every time I think of something, I write it down. I definitely have a story to tell the world."

Everyone in the program that spoke with Scene says that the writing is an important part of staying human in prison, of channeling some sense of self.

"It keeps them from repeating and coming back," Max says. "Me and all the guys - everybody in the group - I've seen them teeter-totter and go from bad to good. I try to give them this opportunity so they can come here and see what's good."

Max blinks, taking a moment to describe what all of this means, and a tear rolls down his cheek.

"It's hard. I made a mistake to come here and I'm trying to help everyone here help each other. I really regret my mistake. I'm just ready to get out of here. I want to help all these guys to do good, then they can help other guys do good. In my group, that's the purpose before them."

His influence on S.D.P. is clear. Mike, another rapper with the group, says that he had never done anything like this in his life before meeting Max. "I never did the music thing. I used to always help Max set up. I took a liking to it, and he gave me an opportunity to let my voice be heard. I did some songs, and I really liked it. It helped me express myself. It shows that we're locked up, but we're able to do something positive."

Supa Dupa Productions cut a CD recently, and they'll be performing their original songs for the general population later this month. It'll be one of the handful of concerts performed this year. The earnest pride with which these guys speak about the chance to play live is a shocking contrast to to the drabness around them.