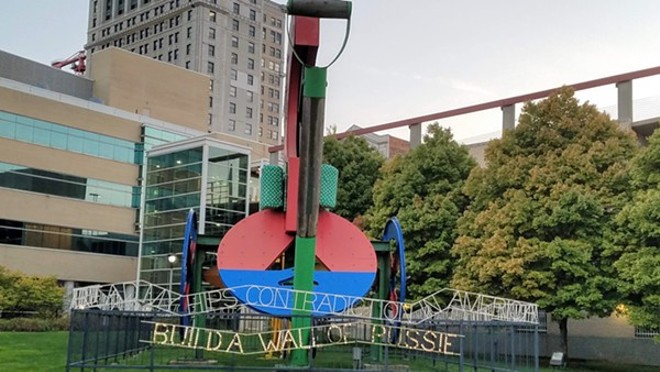 Artist Billie Lawless has reached a settlement in his lawsuit against Cleveland State University over the school's censorship of wording added by him to The Politician: A Toy, which resides on land owned by CSU.

The sculpture has resided off East 18th on the CSU campus since 2008, before which it had lived on private land for 14 years. Throughout the years, it's stood as a skewering and satirical comment on politicians and politics. Notable phrasings in previous years included "Obama Scare," but CSU never attempted to censor the messages until recently and only after "BUILD A WALL OF PUSSIE" was added, according to the lawsuit.

According to the Pattakos Law Firm, which represented Lawless, "CSU agreed that Lawless would retain all ownership and intellectual property rights in it, that the University would not 'modify, disassemble or demolish the Sculpture.'”

CSU had covered the phrase last year; Lawless filed suit afterward. As part of the settlement Cleveland State will pay Lawless $50,000. In the interim the university, as per the contract with Lawless, gave six-month notice that it would have to be moved. The settlement denotes Lawless will have to move the sculpture by July 24, 2019.

Cleveland State University and Billie Lawless thank each other for their 10-year relationship during which CSU displayed The Politician: A Toy on its campus. The parties have worked together to amicably resolve their recent dispute. The Sculpture will remain on CSU’s campus until mid-summer 2018. Any statements on the Sculpture are attributable only to the Artist, and do not represent the official position of the University. The parties wish each other well in all future endeavors.