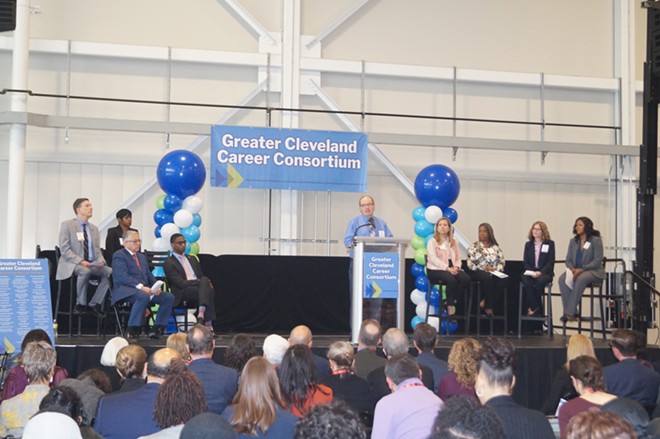 CMSD CEO Eric Gordon, Cuyahoga County Executive Armond Budish, Cleveland Mayor Justin Bibb and others celebrated the regional partnership and indexed the merits of exposing students to a range of career options at an early age. Bibb credited Look Up to Cleveland, a leadership development program for local high-schoolers, with making him believe he could be a corporate leader or mayor one day. And he framed the new partnership as a critical step for the poorest big city in the country.

The Greater Cleveland Career Consortium, as the collaborative is known, has already enlisted the support of 50 local companies. It is being hailed as a win-win for both businesses and young people. Employers have long lamented the abundance of unfilled jobs — in manufacturing and IT, notably — and hope to use the consortium to develop local talent pipelines.

During a panel discussion, Lincoln Electric's Chief Human Resources Offices, Michelle Kuhrt, said that no amount of advancements in technology will obviate the need for human beings in the workplace, particularly in manufacturing. A JPMorgan Chase exec said that finding talent remains the number one challenge he hears from companies in Northeast Ohio.

For many graduates of the Cleveland schools, college is not a feasible or desirable pathway to a career, and the Say Yes! scholarships are therefore inapplicable. The consortium is theoretically an opportunity for those students (as well as those who plan to attend college) to experience a number of career options in middle school and high school. The goal is that when they graduate, they'll have a better idea of how they want to proceed.

“Over the years, individual employers have generously volunteered time, staff and resources to introduce our District’s students to careers and the skills those careers require,” Gordon said in a news release that summed up the afternoon event. “The consortium will bring those efforts to scale in a way that benefits all of Northeast Ohio.”

The consortium will be lead by Autumn Russell, who formerly lead the youth apprenticeship programs at MAGNET, and will be housed under the organizational umbrella of Youth Opportunities Unlimited, a workforce development organization for Northeast Ohio young people aged 14-24.

The festive ceremony concluded with remarks from the local JPMorgan Chase exec, Rudy Bentlage, who announced that the bank would be contributing $500,000 for the effort. Half of the those funds will go toward CMSD's career pathway programs, and the other half will fund "Project Captivate," the Greater Cleveland Partnership's talent attraction effort.

Evidently, CMSD's Planning and Career Exploration (PACE) curriculum launched last fall was the first program of the Greater Cleveland Career Consortium. The idea behind that is to bake career preparation into the classroom as early as sixth grade, exposing students to different local companies and an array of potential careers. The Cleveland Foundation kicked in nearly $1 million for that program.