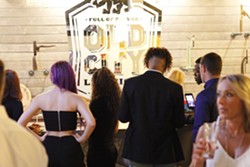 DAVID WALKER JR.
It has been a busy summer for Cleveland. First, the Cavaliers made history by defying and overcoming a 3-1 deficit to bring a championship to a city that hasn’t seen one by any professional sports team in 52 years. Then, the RNC came to town and brought Cleveland much-needed national exposure. Finally, in keeping with the rule of threes, we have Cleveland Hustles, a show produced by locals about locals.

“I’m excited to give back to my community, and Cleveland is definitely my community,” LeBron James told Good Morning America’s Robin Roberts.
Last summer, the prodigal son of Northeast Ohio put on a new hat, then quickly threw it into the ring. James’ name has been attached to the project since as early as last summer, but his role is largely behind the camera as an executive producer. On the other side of the camera, New York native B. Bonin Bough, former Chief Media and eCommerce Officer at Mondelēz International and all around media master, was hand-picked by James and executive producer Maverick Carter to host. The real stars of the show: veteran and up-and-coming entrepreneurs from Cleveland.

The show stars four local business leaders: 30-year-old Kumar Arora; financial adviser Kathy Futey; chef, business owner, educator, and frequent Michael Symon collaborator Johnathon Sawyer; and retired ad agency and business owner Alan Glazen. All save for Futey, who is certainly an honorary Clevelander after 20 years living in the area, are locals whose successes have made them players on the national stage. The four provide capital and mentorship to eight entrepreneurs of burgeoning local businesses.

Hundreds of pitches were submitted and narrowed down shark tank-style to 25, and then to eight, with each of the four veterans selecting two apiece to work with closely. The eight businesses selected: Akron Honey Co., Cleveland Bagel Co., Fount, Groundswell, Old City Libations (formerly Old City Soda), Proper Pig, Randy’s Pickles, and Styles of Success. By the end of the eight-episode season, each investor will choose one of their two finalists as a winner.

The criteria for selecting these eight finalists was strict.

“I don’t think I’m much value to someone just learning how to operate a cash register,” Glazen told Scene.

Businesses had to be more than an idea; they had to have already hit the ground running with the potential and momentum to carry them beyond the local market. Often, businesses plateau at the local level and struggle to grow outside of their old stomping grounds. However, where some see stagnancy, the investors saw potential.

“The question that doesn’t come up for a lot of local businesses is ‘How do I break out of Ohio?’” he said.

Of the four investors, only Sawyer and Kumar had ever been in front the camera before—Sawyer has been on a number of shark tank-style cooking shows and Kumar filmed a pilot for a show similar to Cleveland Hustles for MTV, but it was not picked up. Glazen, Kumar, and Futey all initially expressed reluctance when contacted initially. Before the show, Glazen had retired from advertising and focused his attention on neighborhood development on Cleveland’s west side. When they were approached by CNBC in August of 2015, Arora and Futey thought it was a phone scam.

“I said no at first. I thought it wasn’t real,” Futey said. “Making a difference finally convinced me that this is going to be business and revitalization,” she added, after vetting the network’s authenticity.

With the wealth of knowledge and resources at their disposal, the relationship between the veterans and the up-and-comers could have easily been didactic and haughty on screen, but that is simply not their way. (Arguably, it isn’t the Cleveland way.) Over the course of filming, their relationships became symbiotic, one of mutual gain and respect.

“These are practical people; they got their hands real dirty,” Glazen said.
Despite the often unforgiving nature of the business of business, the investors' relationships with entrepreneurs continued off-camera and even after cameras stopped rolling. Arora, for example, purchased a derelict building in Gordon Square that finalists Fount and Ohio City Soda, one of which he did not work with directly, now share.

“Our standards for success are much higher. Success, for us, means giving back,” said Glazen.

These folks are doing good, and they’re doing it well.