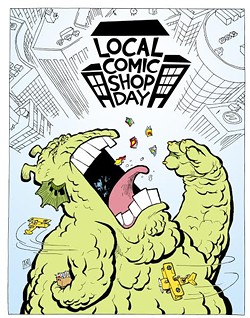 While we’ll have more info on this year’s Genghis Con next week, Local Comic Shop Day takes place across the country this Saturday, Nov. 19. This year, three local comic shops are participating : Cleveland’s Carol & Johns, Willoughby’s Comic Heaven and Cleveland Heights’ Imaginary Worlds Comics. Now in its second year, the event features 28 items only available at participating brick-and-mortar comic book shops. Local Comic Shop Day was created as a response to Record Store Day, which itself was inspired by Free Comic Book Day (held annually on the first Saturday of each May).

Quantities of these exclusive items are extremely limited. The shops recommend arriving early for best selection. Carol & John’s will be open at 10 a.m. selling items on a first come, first served basis. Comic Heaven and Imaginary Worlds open at 11 a.m. on Saturdays.

For Local Comic Shop Day, "We also use it as a goodwill day, where employees have some extra books to hand out to customers that they feel strongly about of that they think would resonate with that individual,” says John Dudas, owner of Carol & John’s, which he co-founded 25 years ago with his mother Carol Cazzarin (who retired earlier this year). “With the purchase of any LCSD item, we'll also throw in a free Captain America or Spider-Woman graphic novel. The boys also have a box of comics to give away when you check out, so ask them for something cool and they'll give you a couple free books based on what you're buying and they'd think you'd like.”

BLACK FRIDAY
Next week, Carol & John’s hosts its annual Black Friday sale. For more than 20 years, the event has served as the shop’s annual customer appreciation event. For one night only, Carol & John’s opens up its back room and foyer with over 50,000 comic books priced at just $1 each with no limit. The event takes place on Black Friday, Nov. 25 from 7 p.m. to midnight.

“While it’s easily our biggest sale of the year, it has actually become sort of an anti-Black Friday Event,” says Dudas. “Our ‘Anti’ Black Friday event is actually our longest running shop tradition, going on 21 years now. We have our event from 7 p.m. to midnight on Friday evening, so that we are not a part of prying you away from your family during the holiday. Our goal is to provide a fun shopping experience and not some epic consumer battle. We also know that quite a few of our customers work retail themselves, " this late night event gives then a place to unwind and do some shopping themselves before heading home. We open up our back room and invite people to dig through it. Great for collectors, as the more you hunt the better. The back room can be a mess."

Also that night:
20% off all Graphic Novels and Hardcovers
50% off all Back Issues
20% off the New Comic Wall
20% off Statues and Action Figures
Discount Graphic Novel Bins reduced to 75% off.
10% off everything else

“We will have sales all weekend from Friday to Sunday, but nothing as amazing as Friday Night,” Dudas promises. “We’ll also keep the $1 bins out all weekend too, in case you can’t make it up for Friday’s event.”

An annual tradition, the shop’s raffles begin at 7:30 p.m. The shop will be giving away 5 graphic novels every half hour until midnight – 50 books in total. Tickets are non-transferable, and you must be present to win. Customers may win up to three times throughout the evening.

“You get a raffle ticket for every 10 dollars you spend and the tickets stay in there all night long,” says Dudas. “This greatly increases your chance of winning if you stick around. We also do other random raffles throughout the night when the energy is up. At midnight we raffle off a $100 gift certificate. Lots of people head out for a few hours and return at midnight for a chance to win.”

Additionally, Dudas will be selling 30 boxes of traditional (non-comic) books for $2 per book.

“On a non-comic book side note, I trimmed down my book collection at home and there will be 30 boxes of non-comic book books in the back of the shop for $2 each,” Dudas says. “Books about music, punk rock, movies, television shows, any bizarre things that I've ever over researched though out my life. Come crawl around my brain and take a chunk out of it for $2. (seriously, 30 long boxes of stuff.) Maybe even some CDs too.”