Its goal is to promote the circular economy as a way of helping the environment and creating jobs and economic opportunity for residents. 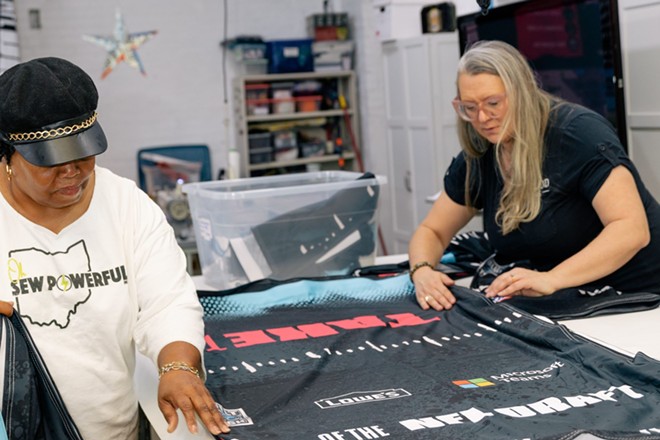 Plastic is everywhere, and we can’t seem to get rid of it. It litters our streets, clogs up our waterways, and fills up our landfills. So why not turn it into art, protecting the environment while creating something lasting and beautiful at the same time?

That’s the attitude of Ron Shelton, a Cleveland-based artist and self-described “plastic hoarder” who turns plastic trash into mats, sculptures, and other artwork. Shelton, who recently bought a home in the Fairfax neighborhood and turned the first floor into his studio, got inspired when he saw other artists making art out of plastic.

“What I kept seeing four years ago was artists from all over the world using plastics they collected from their environment in their artwork,” said Shelton, a Columbus native who moved to Cleveland 14 years ago. “And it just, it changed my life. So, four years ago, I started plastic hoarding myself. I didn’t recycle any plastic, I saved it, and the amount of plastics I collected in just one month was mind-boggling.”

Shelton wanted to do something sustainable with the plastic he was collecting in his basement, knowing that if he tried to recycle it, much of it would wind up in a landfill. According to the U.S. Environmental Protection Agency, only 9% of plastic is truly recycled. The rest ends up in landfills and takes more than 400 years to degrade.

So, the Black artist began working with plastics as a medium. He began weaving plastic bags into mats, turning discarded kitty litter boxes into sculptures, and making raincoats from sheets of plastic. Today, he works with a nonprofit artist collective he created called High Art Fridays, many of whose members also sell artwork made out of plastic.

Shelton is an ambassador for Circular Cleveland, a new initiative led by the nonprofit Cleveland Neighborhood Progress (CNP) and the city of Cleveland. Its goal is to promote the circular economy as a way of helping the environment and creating jobs and economic opportunity for residents.

Last year, CNP and the city won a $476,000 grant from the Robert Wood Johnson Foundation to develop a circular economy roadmap that will help the city achieve its climate action plan and sustainability goals. CNP and the city have so far recruited ambassadors, funded small demonstration projects, and held community workshops. They’re set to release the roadmap early next year.

The program will also create a request for proposals (RFP) for a new composting program at the West Side Market. The RFP is scheduled to be released in January.

“Circular Cleveland is an opportunity for us to develop a comprehensive plan for how we transition to a more sustainable economy in Cleveland,” said Jason Wood, the city’s Chief of Sustainability, in a release. “It’s particularly exciting because it’s more than just a plan. It includes funding for real projects we can use to make our neighborhoods healthier and more resilient.”

Circular Cleveland funded $44,000 in grassroots projects this year in partnership with Neighborhood Connections, in addition to providing ambassador stipends. Next year, the Circular Cleveland initiative will offer approximately $100,000 in small business incentives administered by the City’s Department of Economic Development and a second round of community grants administered by Neighborhood Connections.

Marvetta Rutherford, an ambassador from the Mt. Pleasant neighborhood who has been a sustainability advocate since before it was cool and has run community gardens in her neighborhood, said the city has to earn the trust of residents in order for Circular Cleveland to be successful.

Many are still wary and confused, she said, because the city stopped recycling a year and a half ago after it was unable to obtain an affordable contract. It didn’t tell residents, many of whom believed they were recycling when really their waste was being dumped into a landfill. Nearly two years later, the city is restarting its recycling efforts as an opt-in program – but that trust gap still exists.

“The city didn’t do a good job educating residents on recycling,” Rutherford said. “They could use an ambassador – or three – in every neighborhood and ward.”

In reality, there are nine Circular Cleveland ambassadors across the city – five on the east side and four on the west – who have been meeting regularly to receive training and develop education programs in their communities. Their aim is to spread the word about the benefits of the circular economy and engage residents.

“We need to help the residents of Cleveland understand how important it is not to be so wasteful, and to be mindful of the plastics economy we have,” said Rutherford.

CNP and the city have funded 14 grassroots projects that aim to build the circular economy, ranging from a composting project in the Ben Franklin Community Garden in Old Brooklyn and a community sewing program that turns materials from the NFL draft into sustainable products to a fruit and vegetable canning effort in Mt. Pleasant.

Wood said that the ambassador program is critical because it engages residents, working to ensure that the benefits of the program are spread equitably to Cleveland neighborhoods. The long-term goal is to create an economic engine that could create jobs for residents.

“A lot of our residents have been actively engaged in circularity for a long time, whether it was out of community norms and that shared sense of neighborhood or whether it was out of necessity,” he said. “How do you take that thing that you’re doing for your neighbors and maybe it makes sense to scale that up into a business?”

The Land interviewed several ambassadors who are skeptical of the city’s ability to follow through on its promises. Kristi Fann, a Circular Cleveland ambassador in Stockyards, said there’s a lot of illegal dumping on vacant lots in her neighborhood, and she can’t rely on the city for help.

“Contractors are using our neighborhood as a wasteland,” said Fann, whose block club organizes neighborhood cleanups with the Metro West community development corporation. “The Fenwick Block Club does the job of cleaning up our neighborhood because where we can’t rely on city services, we do it ourselves.”

Daniel Brown, co-founder of Rust Belt Riders, a composting and soil company, was more pointed in his commentary.

“It’s been frustrating and slow,” he said of the Circular Cleveland initiative. “For getting such a prestigious grant, it doesn’t feel like there are enough experts who are based in this region. I don’t feel like Circular Cleveland has enough of a ‘there’ there to show how it’s part of the climate and economic policy of the city and county and their growth plans.”

As the Circular Cleveland program revs up, its ambassadors have been hard at work educating their neighbors about the benefits of the circular economy.

In addition to working in schools, Shelton hopes to collaborate with the Cleveland Clinic and Fairfax Renaissance Development Corporation on a project to turn hospital plastics into outdoor sculptures.

Demetrius Carter, who grew up in the Central community and now lives in Hough, is also a Circular Cleveland ambassador. In the past, he’s taught Central residents how to compost and grow their own food. Now, he’s teaching students at George Washington Carver School on East 55th St. about composting. Food scraps and yard waste make up 30 percent of what we throw away, according to the US EPA. and in landfills, they release methane, a potent greenhouse gas.

“One of the kids listened to me talk about composting and said, ‘So, we take food scraps, create soil, and then use that soil to create more food … Isn’t that kind of like infinite food?’” he said.

David Van Horn, an ambassador in the St. Clair Superior neighborhood, helps residents make art out of recycled material. He’s using Circular Cleveland to expand his grassroots program, which is called Art Block and uses potlucks to foster conversations about waste and food insecurity, to other neighborhoods.

“We use art as a vehicle to talk about ways to reduce waste,” Van Horn said.

Circular Cleveland’s ultimate goal is not just to remove a small amount of plastic from the waste stream or fund a handful of small demonstration projects, however. Its aim is to grow jobs in new industries that help mitigate climate change. Wood says it will take an ongoing commitment that will start next year with the roadmap and grant opportunities.

Rutherford said that Circular Cleveland can help realize the original goals of Sustainable Cleveland, which include making Cleveland a metropolis that embraces sustainability as something more than a feel-good term.

“This is about taking the ideology of being a ‘green city on a blue lake’ and making it so that it’s not just a buzzword, but something in actuality,” she said.

Lee Chilcote wrote this article for The Land.