Local News Outlets Are Ganging Up on Kyrie Now 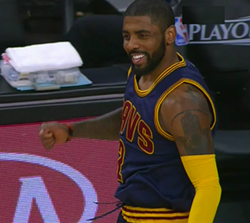 Scene Archives
When LeBron left, the city erupted. Now, with Kyrie Irving apparently maybe sort of out the door, the city seems like it’s going down an even darker path: sour grape winners.

In the days following the news that Irving wants to bail on Cleveland and move across this flat earth to greener pastures in San Antonio or Minnesota or wherever, the fandom has been all over Irving.

And now local media is getting in on the action, too.

Fox 8 dropped a new ad on Monday morning aimed squarely at Kyrie and his desire to leave.


The opening salvo takes an unintentionally funny tough guy approach: "This is Cleveland. You're either with us or against us. You have to be tough to thrive here. And if you don't want to be part of our story, that's fine..."

Quoting one of President George W. Bush’s most infamous lines at a basketball player whose sin is wanting to go to another team? That hot take fire is right up there alongside Cleveland.com's recent video that calls for literal fire to be used on Kyrie jerseys.


It's one thing for an embittered fan base to take out their frustrations on local athletes by ranting on 92.3 or posting terribly shot videos on social media. But this lunacy reaches another level when the news media is also getting in on the act.

Cleveland is a tough city filled with tough, sturdy people who are among the most loyal sports fans in the world, especially with what they've been through over the years. Any sports fan in the city over the age of 65 should receive a medal of honor for their fandom.

But come on, Cleveland. You have to be the bigger person here. And that starts with your front-line media folks. Sure, maybe it's all in good fun, but the whole "Eh, it's cool if you don't wanna be here" aesthetic is lost the moment you have to say it.

It's like no one remembers having to dust the ash off their half-burnt LeBron jerseys a few years ago. And, now, the team at least has a title! Cleveland fans have survived worse than this before and will survive worse again (like, say, next year when LeBron takes his talents to Long Beach).

The odds of Kyrie and LeBron making up and moving on are pretty slim, especially after that video of Kyrie and Steph started making the rounds this weekend.

It's hard enough convincing players to come spend the winter in the Midwest; there's no reason for half-baked snarky media content to give them more reasons to head to the coasts. Or, ya know, Miami.