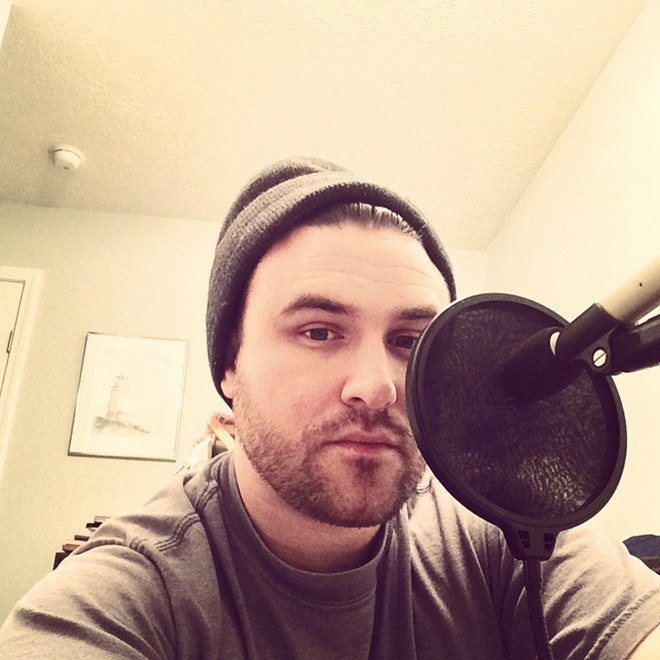 Aaron Calafato moved back home to Northeast Ohio in 2009 after four years in New York City where he was trying to make it as an actor.

After returning to Ohio, he started working at a for-profit university in Akron. The job brought his life full circle, in a good and bad way.

Part of the financial struggle that marked his time in New York and one that drove him to leave, he says, was the massive student loan debt he’d accumulated while attending Bowling Green. Now back in Ohio, working at a for-profit college, he was part of the cycle. “I was putting kids into debt in order to pay off my own debt,” he says. Calafato felt like he was part of the problem; he turned back toward the stage to be part of the solution.

He created a monologue called For Profit and began touring the country performing his one-man play, never writing down a full script, but instead telling personal stories related to his own debt and his time spent in an organization that increased that of others. He hit a nerve. Calafato’s creation and performances were covered by national publications like The Nation and The Huffington Post. And in conjunction with his show he also created a non-profit organization called Student Debt Crisis, which he describes as, “the first digital platform for student debtors across the country.” Student Debt Crisis was created to “use that as leverage to help pass or influence politicians to pass legislation related to student debt.”

At the end of his shows, Aaron would moderate a discussion with a local activist or politician, doing a question-and-answer session related to student debt and other ongoing issues facing the community. “Some of the best parts [of touring] wasn’t my performance, it was the conversation afterwards,” he says. “The audience would completely shift over and start telling their stories. The warmth or the authenticity of the performance gave the audience the permission to share their stories.” After three years on the road, Calafato thought it was time to retire the show. He was having a daughter and wanted to be around more for her, and also wanted to avoid being pigeonholed as “the student debt guy” when he was 60 years old.

The conversations at the end of For Profit, combined with a long-standing love of all things radio, stirred Aaron to start his podcast, called Authentic Audio. “The instinct was, how do I keep creating, not how do I make money,” he says. “I sort of carved out this niche as a storyteller.” He started the podcast last March and has recorded 21 episodes to date, talking with well-known Northeast Ohioans like former State Senator Nina Turner, City Club CEO Dan Moulthrop, former Cleveland Brown Steve Sanders, Terrence Spivey, the former Artistic Director of the Karamu House theater and David Giffels, a professor at the University of Akron and a published non-fiction author.

Calafato has ambitious goals for the podcast. He wants it to represent all viewpoints, so while he may have some big names like Nina Turner on from time to time, he also wants to be “a platform for the unheard.”

While Calafato loves representing Cleveland, he also wants the podcast to be more than just a local show. He wants it to “emanate not just from the city but from the Rust Belt. There’s these universal connectors that could be staged anywhere. I want this to be a program that does get national exposure but emanates from Cleveland. It’s from this region but is also listened everywhere. I don’t want to make it so Cleveland-centric where only Cleveland people will understand it.”

The podcast takes more of a conversational tone that flows freely from host to guest as opposed to a strict question-and-answer format. Each episode begins with a personal story from the host, and then the conversation begins, with Calafato weaving the introductory anecdote into the conversation with the guest in order to create a theme or motif.

Calafato has a partnership with the City Club of Cleveland, which is where he usually records, although he also goes to the homes of his guests at times too. He records it with help from his producer Dr. Ken Wendt, the IT Coordinator at Case Western Reserve University.

If Aaron Calafato continues to have the wide-ranging, introspective and blunt conversations evidenced in the first year of Authentic Audio, his wish of having the show receive national attention may very well come true.

You can find the podcast on iTunes or SoundCloud and also at www.authenticaudiopodcast.com. Know someone who would make a good guest? Calafato says to get in touch.