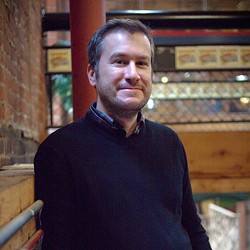 The goal of the Cleveland Stories Dinner Party is to "bring to life some of the fun, interesting stories about Cleveland's past — from sports, to rock 'n' roll, to Millionaires' Row," as it's put in a press release.

Admission is free, with no cover charge, although a prix fixe dinner, designed to complement the night's theme, is $20. Doors open at 5 p.m., dinner is served at 6, and the storytelling starts at 7.