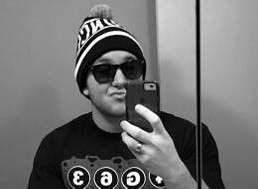 FACEBOOK
Fye
Ryan Fye, convicted for his role in a fatal car crash and sentenced to six months in prison, returned him last month and posted a firm message on his Facebook page: "Prison didn't break me. It made me." The post was accompanied by what a judge is calling an "obscene gesture," though screenshots of the post aren't immediately available.

Anyway, the car crash victim's family was upset with the post, and a judge declared the message in violation of sanctions imposed on Fye amid his early release from prison. Fye is currently back behind bars.


For everyone who has seen the photo of me saying "hi" to my haters. I hope you all dont take it the wrong way. Because many people are making it a big deal for some reason and wont leave me alone about it. Its directed towards all the Fake friends i had and have, all the people trying to snoop and talk shit about me like im some sort of monster. It has NOTHING to do with my case what so ever nor the parties involved in my case. Its a simple gesture to those who hate me, those who always called me fat, the ones who dawned on me, and of course me saying "fuck prison" cause prison isnt something i would wish upon my biggest enemy. Dont judge a book by its cover unless you plan on reading the whole book. Have a good day everyone!