Lorain Now Has Its Own Giant Script City Sign 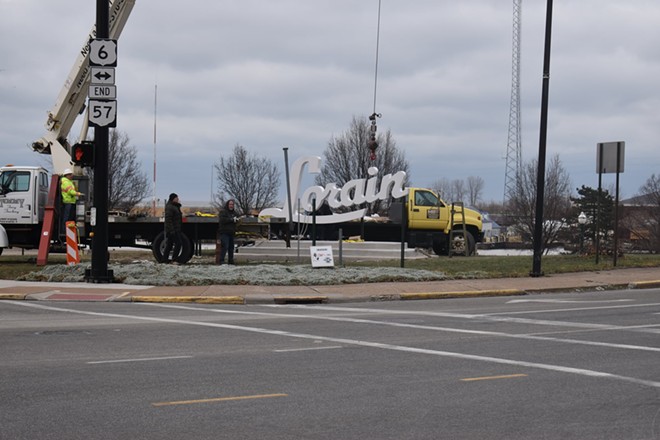 If cities are judged real or not by whether they have a giant script sign with which residents can take selfies or family photos, count Lorain as a real city as of last week.

Lorain's version, very much like the six that dot Cleveland and the one in Parma, was installed last week at the corner of West Erie Avenue and Broadway.

Made possible by local residents who pitched the idea and raised the $25,000-plus needed to have the sign built, installed and maintained, the 16-foot sign was made by Kuhn Fabricating, which said the process involved nearly 200 man hours.

Andrea Neal, a local realtor and one of the residents who organized the campaign, told the Chronicle-Telegram last year: “The main idea, for me, was to draw people to the city. We’re refurbishing the downtown area and I thought it was appropriate to have that sign there for people to come and take a picture, make it your backdrop and then of course … go and visit the restaurants and what have you throughout the city,” she said.

Lorain mayor Jack Bradley cut the ribbon last week and unveiled the sign, channeling JFK while he thanked those who made it possible, according to the Morning Journal.