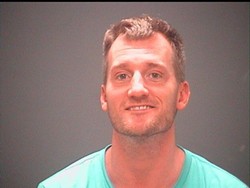 Courtesy Cuy Co Sheriff
Jesse Joe Cundall was arrested earlier this month for scamming Cavs fans and others with fake event tickets in January. Cundall was indicted on 14 charges by the Cuyahoga County Grand Jury.

(Read the original story below.)

Through selling tickets on Craigslist to the Christmas Day Cavs-Warriors game and the Bruce Springsteen concert in February, Cundall made more than $1,000. His charges include theft, forgery, trademark counterfeiting, telecommunications fraud and engaging in a pattern of corrupt activity.

Cundall will appear in court later this month.

Pay really close attention to what you buy online, folks. You knew that already, but it bears repeating.

Today's evidence: a man is facing charges for scamming a Cavs fan with fake tickets this past January.

Jesse Joe Cundall, 44, is facing two felonies, trademark counterfeiting and telecommunications fraud, after making more than $1,000 off fake Cavaliers tickets. His unknown victim bought what he thought were tickets to the Christmas Day Finals rematch against the Golden State Warriors after finding a listing on Craigslist. The tickets had a supposed face value of $7,500. They ended up being worth $0.

Cundall was arrested in mid-April, but a Cuyahoga County grand jury hasn't issued an indictment yet. Right now the case is slated for early charging and disposition.