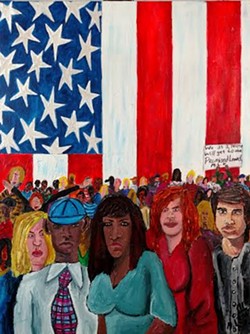 Lovelace
Due to the short week between the Waterloo Arts Fest last weekend and July’s first Friday Walk All Over Waterloo event, most of the art district’s exhibitions remain on view this week. However, the Maria Neil Art Project is busy with two new exhibitions.

"Never did I imagine that our little 'art project' would blossom into something so creative and exciting,” says Adam Tully, co-owner of Maria Neil Art Project. "Here we are presenting two emotionally powerful bodies of work, in two equally great spaces, in a neighborhood that is bursting with artistic energy and vitality. 2016 has been a fantastic year for Cleveland art and the artists we work with, and now we find our summer is just heating up. With Michelangelo and Justin's work we're ready to take that heat through the rest of the year."

Its main gallery space hosts the return of local painter Michelangelo Lovelace, who was the first artist to be showcased in the gallery in its inaugural exhibition. Lovelace’s We the People is timed as a response to the RNC.

“When we opened our gallery in 2013, our first exhibition was Michelangelo Lovelace,” reflects co-owner of Maria Neil Art Project John Farina. “We’re very excited to not only exhibit his work, but to represent him. Over the last few years, Michelangelo has really seen his already bright star get brighter with a major exhibition at MOCA, a Cleveland Arts Prize and his work being acquired by the Cleveland Museum of Art. This exhibition is a body of work he has been creating over the last year that reflects his strong feelings about some of the major issues of the day - especially those affecting African Americans. It has his usual touch of seriousness and humor and is even emotional at times. It is really powerful to see. Being able to present work like this by such an important artist is something both Adam and I are proud and humbled by.”

Lovelace used his struggles and obstacles as inspiration to create a new life as an artist. The Cleveland-based painter’s work explores a wide range of socio-political issues within the African American community, including poverty, violence, crime and drugs. Through painting, Lovelace expresses his fears and anxieties, as well as his hope and aspirations.

Lovelace was born Michael Anthony Lovelace. Growing up in Cleveland, his friends nicknamed him Michelangelo for his early interest in art. He dropped out of high school at 16, but when he received sole custody of his children, Lovelace enrolled at Tri-C Metro and earned his GED at age 22. Upon enrolling at the Cleveland Institute of Art in 1985, Lovelace legally changed his name to Michelangelo and declared his intention to pursue a career in art. However, trying to afford art supplies and tuition while raising kids on food stamps and welfare became too much.

Through all his struggles – three divorces, two bankruptcies, an unsuccessful move to Los Angeles and the deaths of a young son, his best friend and his mother – he continued to paint. Years later, his hard work has paid off. His work resides in the permanent collections of Progressive insurance, the Cleveland Clinic and Artists Archives of the Western Reserve. His paintings have been exhibited in New York, Baltimore, Chicago and throughout Ohio.

He estimates he has produced over 500 paintings and still has many more he wants to create. He draws inspiration from personal and social issues in his community. Lovelace was a student of the late Rev. Albert Wagner, considered one of Cleveland’s most accomplished folk artists. His paintings have been recognized with a Creative Workforce Fellowship, Cleveland Arts Prize Mid-Career Artist Award, as well as exhibitions at MOCA Cleveland and 2731 Prospect.

Meanwhile, MNAP presents the work of local abstract expressionist Justin Brennan in the Native Cleveland Annex, located around the corner from MNAP, between Native Cleveland and Star Pop Vintage + Modern.

“Justin Brennan’s work is an interesting complement to Michelangelo’s,” continues Farina. “Justin works from the heart, as Michelangelo does, though the result is strikingly different. His abstractions sometimes feel a little dark and others feel like light is working hard to get through. In fact, this body of work is some of the most vivid and colorful he has done. Justin continues to impress us with his ever expanding palate and his continued growth as a painter. The Annex next to Native Cleveland is a perfect space for this intimate exhibition.”

Brennan maintains a painting studio inside Survival Kit (third floor, suite 303) at 78th Street Studios. Before moving into the space last fall, Brennan was painting out of his modest Tremont apartment, using his kitchen as studio that more closely resembled a laboratory – with a combination of household chemicals and painting supplies. Brennan’s artistic style has evolved in recent years towards non-representational art, specifically abstract expressionist painting.

Brennan’s creative process is a reactionary one. Slashing strokes of paint across the canvas in different directions, Brennan goes through a specific process, but utilizes an element of chance. Lacking any representational imagery, Brennan’s work is meant to be felt as much as seen.

Both exhibitions open with free, public receptions from 5 to 10 p.m. this Friday, July 1.

Justin Brennan’s Turbulence remains on view through July, and Michelangelo Lovelace: We The People continues through Aug. 14. You can see more of Justin Brennan’s work on the third Friday of each month at 78th Street Studios.

Of course, there’s plenty more to see throughout the neighborhood.