A publishing magnate's golden touch turns to rust -- and leaves his ex-partner broke. 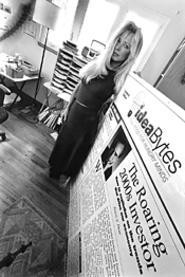 Walter Novak
Cindy Oster's lofty ambitions were a bust.
"There's nothing more exciting than a new idea!" So said Sal Marino, the Cleveland publishing magnate who built a small company into the $300 million global force that is Penton Media Inc. And for a time at the turn of the new century, it seemed like any new idea was a good one. The dictate that a product must be profitable seemed momentarily suspended during the fevered gold rush of the New Economy. People quit their jobs en masse to start businesses, giving rise to a nation of Horatio Algers.

One was Cindy Oster, whose blond hair, busty figure, and midriff-exposing shirts leave the impression of a comfortably aging Playboy bunny. She had enjoyed a profitable if quirky career that ranged from designing McDonald's coloring books at age 19 to writing a nightlife column for the now-defunct Cleveland Press. Then she started a marketing company. She grew accustomed to a six-figure salary, but was perhaps too idealistic for the work. Once, she became mortified when she discovered a client made false promises in an advertisement she wrote. "I just felt like a slut," she says.

So she did what any self-respecting person did in the late 1990s -- she switched careers. She flirted with becoming a minister -- a fitting penance for her advertising sins. Then inspiration struck. She would create a newsletter that offered concise advice for Cleveland's harried movers and shakers. Businesses would pay to be sources and establish themselves as experts. She called it Professional NewsBytes.

It wasn't Vanity Fair, but Professional NewsBytes showed early signs of promise. With an issue every six weeks, Oster made about $5,000 each and sewed up $175,000 in contracts. She also received encouraging praise from Sal Marino, whom she spoke to for a story about how to be a humble CEO. "I enjoyed our interview this morning, and it piqued my curiosity about your publication and, particularly, its ownership," Marino wrote in a fax to her. "It's the kind of property with which I would like to be associated."

Such praise was not to be taken lightly. Bald and squinting through glasses, Marino looks like an affable grandfather and brims with just as much wisdom. He doesn't speak so much as issue pronouncements. "In business, one of the quickest paths to profit is a competitor's mistake," goes one of his maxims. If he sounds like a know-it-all, he has earned the right. He worked at Penton for 42 years, published two management advice books, and was honored with a lifetime achievement award from the Society of Professional Journalists.

Now he wanted to become a part of Professional NewsBytes. He courted Oster and offered a candid assessment of her company: It had "long-range, multimillion-dollar potential," but only if it had money and good leadership. That's where he came in. "I'm cocky enough to suggest you need someone like me," Marino wrote. "I'm not bragging. I'm stating fact." (Marino did not return phone calls requesting comment.)

Even as Oster negotiated the contract with Marino, he was generous with his input. Marino was a student of "grabbers" -- catchwords like "Free," "Exciting," and "New" that seemed to hypnotize consumers into action. "In my research of 'grabber' words," he wrote, "one word never failed to be listed among the top five. It is one of the magic words in marketing: IDEAS." He insisted Oster change the newsletter's clumsy name to IdeaBytes.

Yet the negotiations dragged on, and Marino showed little patience for the legal wrangling. "What I feared would happen is happening," he wrote. "We're getting bogged down in lawyer quicksand."

Oster took the criticism seriously. She quickly inked the deal in August 1999, but not before having a premonition: The night before signing the contract, she dreamed the pen was full of poison.

The eerie vision was easy to slough off during the honeymoon of their partnership. Fears that she was in over her head were assuaged by the gushing faxes Marino sent. He told her that a publication is only as good as its editor, and she was a perfect fit. "I knew there was a high-powered brain inside that nice girl exterior," he wrote. "I've always prided myself on being able to see a person's brain, heart, and gizzard, even when I'm distracted by a shapely body and an attractive face."

Spry for a 79-year-old, Marino was usually the first at the office. When Oster arrived, she would hear big band music echoing through the hall. Marino often waited in the reception area. "If he was doing that, waiting for me, I knew we were going to jitterbug," she says.

Marino seemed to be in love with IdeaBytes, and like all smitten men, he spent lavishly if not always wisely. He frittered away $5,000 on a cocktail party at Jacobs Field for potential advertisers, during which he gave away 10 crisp $100 bills to corporate bigwigs. And he impulsively changed the newsletter's name to IdeaBytes.com, though it meant trashing thousands of dollars' worth of stationery, brochures, and business cards. There was, however, a small problem: IdeaBytes still had no sales team to generate revenue.

Throughout it all, Oster kept mum. They would have to spend to get IdeaBytes off the ground, Marino had said, and they were in it for the long haul. Still, the irony was not lost on her that a newsletter that threw away money like confetti also published articles headlined "3 cardinal rules for maximizing your investment." As one editor quipped: "One of these days, we should start following our own advice."

But just five months into the partnership, Marino's interest began to wander, when he began negotiations to buy another company. The stream of excited faxes choked off to a trickle. He had installed his son, Carl, as CEO of IdeaBytes Limited, but Oster says he was as absent as his father. (Carl Marino declined comment.)

By the time IdeaBytes published its second issue, it became clear to Oster that her once cozy relationship with Sal Marino had chilled. She faxed him and asked why they hadn't spoken in a while. He invited Oster and her staff to a luncheon at his country club. Afterward, she hugged him goodbye. "But he was very tentative," she says. "I knew his affection was no longer there."

By necessity, Oster took over the newsletter's finances. "I was either going to have to dive in, take control, and drive this thing forward on my own or they were going to turn this company into dust," she says. She discovered the books were hopelessly unbalanced. Bills for the company's advertising, printing, and office had mounted to nearly $65,000 a month.

Oster slashed expenses, but it wasn't enough. Then Carl Marino sent word his family was freezing the finances after losing almost $500,000. "The Marino family has taken substantial losses to give IdeaBytes every chance of success," he wrote. "We no longer believe it can be a viable business concept."

Oster's last hope was a pending deal with the Cleveland dot-com e2grow, but she was trapped in a catch-22: She couldn't take ownership of IdeaBytes until she assumed the company's liabilities. But she couldn't do that until she had cash from e2grow. She begged Carl Marino for information about IdeaBytes' debts, and he referred her to his family's accountant, who scolded Oster for her persistent inquiries. "Do not fax me again," he wrote.

Meanwhile, the Marinos continued to dismantle the business. They sold most of the company's furniture and file cabinets, leaving the office appointed like a college dorm room. They also removed the phone system. The final indignity came when e2grow honchos stopped in to see the office. They asked to use the phone, and Oster sheepishly offered the only one she had: a purple children's phone. The deal fell through.

The weeks leading up to the start of 2001 were IdeaBytes' death rattle. Sal Marino had thrown in the towel, suspending the company's operations. "Quite frankly," he wrote, "we see no viable alternative course of action that is even remotely possible."

On New Year's Day, Oster boxed up her stuff and moved out of the office. She had lost most of her savings trying to keep her dream alive, and she hadn't received a paycheck in six months. The bank began to foreclose on her golf-course condo. She had to move in with a friend.

IdeaBytes.com entered the public domain, and e2grow snapped it up. Oster went back to marketing to keep food on the table. The past year has been spent contemplating a lawsuit against the Marinos, but she shelved the plan because it would cost too much time and money.

All she has left is her optimism. Despite the company's collapse, she refuses to believe IdeaBytes was founded on an idea that bit. Someday she wants to give it another go. But a sign of how times have changed can be found on a five-foot blowup of an IdeaBytes issue published in late 2000. The first line reads: "We are almost certain to see the greatest economic boom in our country's history during the decade ahead."