Masrah Cleveland Al-Arabi's Bilingual Production of 'And Then We Met...' at CPT Brings Four Strangers Together on the Path to Mutual Respect 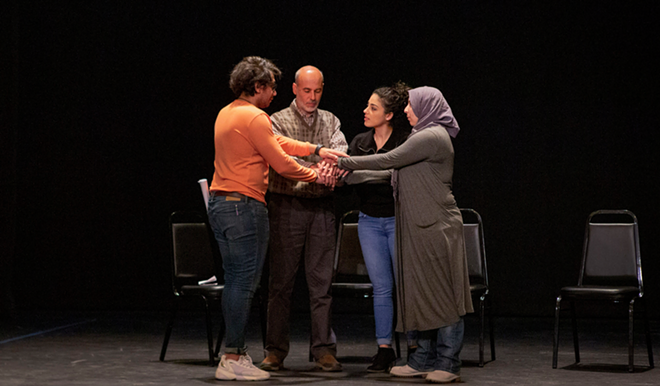 Photo by Steve Wagner
Mickey Rooney and Judy Garland never received an award for promoting cultural engagement, but maybe they should have. Many times, in their song 'n' dance flicks when they were both young and spry, they would gather their friends and shout, "Let's put on a show!" And then they did.

It turns out, putting on a show is a pretty damn good way to bring people and communities together. Cleveland Public Theatre under the leadership of Raymond Bobgan knows this better than most, and the proof is on stage for everyone to see. Their theater company Teatro Publico de Cleveland has been going for seven years, presenting the voices of the LatinX-Cleveland community.

And this is the second year for a new company, Masrah Cleveland Al-Arabi, involving the Arabic-speaking citizens of our town. The latest production by this group is And Then We Met..., an episodic tale of four strangers from the Arabic world with very different backgrounds and religions. The multiple tragedies of war throw them together but also lead them on a path of mutual understanding and respect.

The play, developed by the 11-person cast under the direction of Bobgan and Faye Hargate, is unpolished in a theatrical sense. This is particularly true since many of the performers are first-timers on stage. But this is as much a coming out party for a little-seen community in Cleveland as it is a theatrical event. And in that regard, it succeeds beautifully.

As those four strangers live their lives, in the Middle East and here in Cleveland, we see people struggling for and sometimes achieving the lives they want. The bi-lingual script is performed in both English and Arabic, with surtitles projected in the language that is not being spoken in the moment.

The performers and creators of this piece are Abbas Alhilali, Ebaa Boudiab, Issam Boudiab, Jamal Julia Boudiab, Hussein Ghareeb, Anna Handousa, Ahmed, Kadous, Omar Kurdi, Shirien Muntaser, Haneen Yehya, and Ahlem Zaaeed. And their work—replete with humor, heartache, music and laughter—helps the audience see the world in general, and the Arabic community in Cleveland, in what will be a new light for many.

As Bobgan and Hargate mention in their program notes, our city is stronger when we come together. One way to do that is to put on a show so creators, performers and audience can experience the same moments together. Aa a result, they can see each other for what they really are—fellow human beings who share the same hopes and dreams

When you do that, people can change for the better. Mickey and Judy would be proud.