Mayflies are Swarming Cleveland, and That's Actually a Good Thing 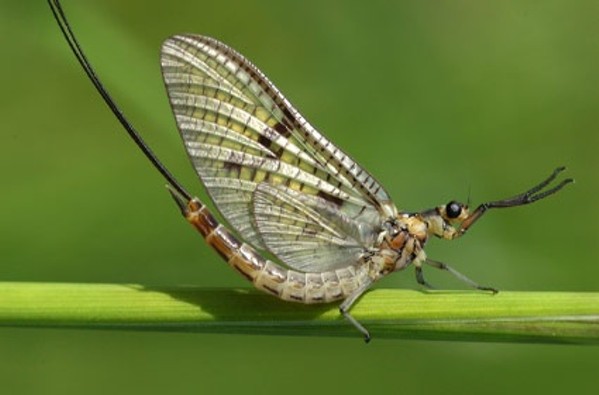 Scene archives
First it was pesky swarms of midges, but now hordes of mayflies are plaguing Cleveland from the shores of Lake Erie. So many, in fact, that the National Weather Service Cleveland picked up the "invasion" on its doppler radar today.

See that large area of green just off the shoreline? Those are mayflies! There are so many mayflies that our radar is able to "see" them. pic.twitter.com/dLr96yM9hK

However, having so many mayflies around may not be such a bad thing. Organizations like the Ohio Environmental Protection Agency say the bugs can help measure the health of the Great Lakes, which will be helpful given the fact Lake Erie is currently considered impared. Mayflies have an extremely short lifespan and need to reproduce rather quickly, so they flock to close, clean water to breed.

"Clean" being the imperative word here.

According to recent research from the Ohio State University, 300-400 mayflies were found per square meter of Lake Erie sediment. That number is a huge increase from 12 mayflies per square meter seen in 1993, showing improvement in water quality.

Mayflies might be annoying and stick to everything from your windshield to your sunglasses, but they'll be gone in a couple weeks. Do be careful about trying to kill them, though. If squished they'll emit a fishy odor.

While they're here, know that they're relatively harmless. They don't bite or sting or talk about you behind your back.