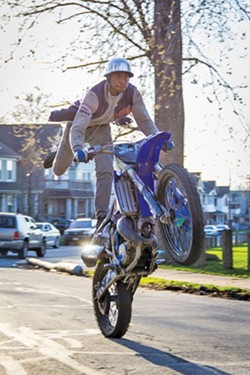 The young Jackson was riding a dirt bike — illegal on city streets — and as he attempted to evade a police zone car, his bike stalled out.

From the officer's narrative:

"I exited the vehicle and caught up with Jackson. As I attempted to grab a hold of him, he continued to try and get away, apparently trying to restart the dirt bike at the same time. After a few seconds of struggle, he wrapped first one arm around me and then the other, as we went to the ground."

Jackson was eventually handcuffed and placed in the back of the zone car. He was arrested for the traffic violation and for resisting arrest, a misdemeanor.

This isn't the first time Mayor Jackson's grandson's dirt biking has appeared in local news. In September, 2015, Carl Monday at Cleveland 19 investigated the culture of dirt-biking in Cleveland. The younger Jackson lived with his grandpa at the time and his dirt bike was spotted on the Mayor's porch.

"He has a love and fascination for riding dirt bikes," Mayor Jackson said of his grandson when pressed about whether he condoned the illegal activity. "It is illegal and he should not be doing it...but at the same time, the people who do this, they're not gang members. He did things he should not have done... but that dirt bike is not going to be on that porch tomorrow."

Primarily at issue in Carl Monday's investigation, and in Scene's reporting on the culture, spending time with the roving bands of wheelie-popping riders roaring through the east side, was law enforcement. Cleveland police are prohibited from pursuing the bikers, and yet the bikers presented safety challenges on the streets and incredibly loud noises for neighbors. The bikers often ride in packs of 20 or 30.

But the dirt bike culture, as evidenced by Frank Jackson's continued participation (despite his Grandpa's ambiguous disapproval), only continues to thrive.

In the new film, The Land, written and directed by local up-and-coming filmmaker Steven Caple, Jr, out this weekend at the Cedar Lee, "Smoke" and his MPWK dirt-biker group are portrayed as street enforcers, a fictional drug-connected gang of thugs. And though Mayor Jackson and the bikers themselves say that the dirt-biking is harmless fun — "they're not gang members," — the general impression is just the opposite.