Who cares if Granny gets her lunch?

Send a News Tip
The Claim 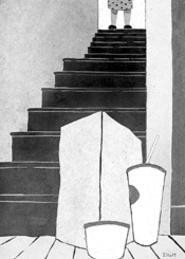 Elliott Golden
We waited all through Sally and Oprah. When lunch finally arrived, we were well into Montel. Perhaps the Meals on Wheels driver had confused my friend Jane with someone in the Alaskan time zone.

It being after 5 p.m., Jane, a retired seamstress who doesn't take things lying down unless she's pinning them to a pattern, had long since given up. "They said it's supposed to come at 3:30," she said, waving a veiny hand in disgust. "Sometimes it comes as late as 6, and sometimes it don't come at all. Now I don't know when it's s'posed to come."

I suspected that, if you listened closely, you could here the strains of geriatric stomachs grumbling all over Hough and Glenville. The last time I'd visited, Jane's lunch arrived piping hot, halfway up the formidable, spindly staircase, just in time for dinner. It was like a sadistic genie had willed it there. There was no sign of the delivery man, who'd barked "Meal!" and deposited the tinfoil tray far from easy reach. Perhaps he thought Jane, who has bone cancer and walks with much effort, was a latent contestant on Survivor and needed an immunity challenge. (Jane is not her real name, because she fears vengeful Meals on Wheels drivers.)

A chain-smoking grandmother with a snow-white Afro, Jane isn't afraid to reach for her cell phone, either to gab with friends or to call the cops when someone with an 18-wheeler decides to use her residential street as a parking lot. She'd already futilely poured her heart out to the tardy Meals on Wheels people several times in the past, her sweet, creaky voice shot through with the determination she'd developed in her earlier years as a neighborhood activist.

Previously, I'd entertained warm, apple-pie-scented recollections of Meals on Wheels. Ordinarily a gentle man, my grandfather would degenerate into a cranky old sea captain if he wasn't served his bologna, applesauce, pork 'n' beans, and glass of juice by 12 o'clock. Years of scheduling his day around the factory bell -- plus decreasing mobility and the demands of taking about 10 different medications -- had him practically setting his watch by his bowel movements.

When he finally got Wheels, the program was a match for his vigilance. Every day at 11:30 a.m., a nice lady would hand him his steaming, institutionally packaged meatloaf and white square of cake. If he didn't shuffle to the door when she knocked, a volunteer would call our family to make sure he was still breathing.

He died four years ago, but his dining experience lives on at Meals on Wheels in Brecksville, Rocky River, Lakewood, and even the Collinwood neighborhood of Cleveland, where all the drivers are volunteers. Lunch is delivered between 10:30 a.m. and noon. By 1 p.m., recipients are well into the digestion process.

So why can't the Meals on Wheels that serves Hough, Glenville, and downtown -- its clients mainly low-income and its drivers paid about $7 an hour -- feed a hungry little old lady before dark? I decided to phone Mr. Wheels and inquire. It took six calls and several weeks to find a sympathetic ear.

Call No. 1: The Western Reserve Area Agency on Aging, the name stamped on Jane's Meals on Wheels literature. Meals coordinator Carolynn Scott referred the call to Jim Moore, the route supervisor with the Golden Age Centers, a private nonprofit that's contracted to actually serve the meals.

Moore didn't reply. Three days later, I phoned again. He explained that Jane's is the last house on the last route, which starts sometime in the early afternoon. "I can assure you, people are getting their meals," he added. "I can assure you, if they don't, we hear about it."

So on time would be when? "Look, there really isn't any such thing as on time," he said. "We have a lot of people to serve, and the demand is such that it isn't possible to feed everybody at a certain time." He wouldn't permit me to ride along as an observer.

Moore referred further questions to Paul Alant, executive director of the Golden Age Centers. "Think about the logistics," Alant urged. "We have to make 600 stops a day in a four-and-a-half-hour period. That's a lot of stops." No, I couldn't ride with them. No, he couldn't promise Jane would get her lunch delivered at lunchtime.

The chain of ambivalence ended with Ronald Hill, head of the Western Reserve Area Agency on Aging. "A lot of times, we don't get those complaints," a fatherly-sounding Hill noted. "Sometimes, older people are reluctant to complain, because they're afraid they'll be penalized.

"There are long routes, so sometimes they're gonna get 'em late. But you have to consider what is reasonable. 3:30? Maybe, but that's pushing it. Any time beyond this, and it gets into dinnertime." He was especially troubled by the delivery driver's half-assed stair climb. "That's a paid position," he said. "If they're not performing the job, that's a problem."

A week later, Jane gleefully confided that her meals were now delivered between 3:30 and 4. "I don't know what you told 'em, but they bring it all the way up the steps now," she creaked, chuckling.

A few days after that, she'd received her lunch at the once-unimaginable hour of 2:30. But now she was afraid of her delivery driver. "He wanted to know what I had said. He said, 'Were you talking to some lady? She tryin' to say that we're not doing our job.'"

Why would the Wheelers stoop to harassing a white-haired granny? "That was totally inappropriate," Hill said of the delivery dude's behavior. "This is precisely why people don't complain. They should be orienting their drivers not to treat their clients like this." He would address all these issues at an emergency meeting this week, he said.

Meanwhile, Jane has decided she doesn't need the hassle of a free lunch with a side of sass, and she might say good riddance. "I'm not feeling well," she confessed from her well-worn couch. "I don't want to go through this anymore. If I have to go through this, I'd rather not have Meals on Wheels." Not that they'd miss her. Like they said, she was last on their list.