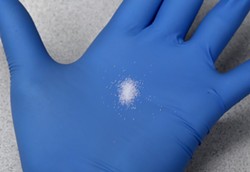 CBSA Twitter @CanBorder
Even extremely small amounts of carfentanil can prove deadly to humans.
One of the more eyebrow-raising developments in the opiate crisis has landed closer to home. The Cuyahoga County Medical Examiner warned today that carfentanil — the "elephant sedative" that's been introduced to heroin supplies across the state — found its way onto his turf.

"Fentanyl and heroin have already killed 300 people this year and we are headed for double the number of fatalities as 2015," Gilson says. His office projects some 500 deaths to be attributed to heroin and fentanyl overdoses by the end of 2016. We've reported before that many in the community believe the problem will get worse before it gets better, and today's news tracks that notion.

Elsewhere, Camelia Carter's petition to demand a "state of emergency" be declared in Ohio has crossed the 10,000-signature threshold and continues to grow.