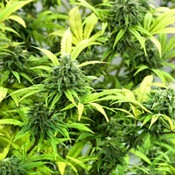 Update: On Friday evening, Ohioans for Medical Marijuana suspended its campaign. Considering the recent passage of the state's medical marijuana bill, organizers are planning on advocating for the legislation and its effective implementation. (See original story describing the campaign below.)

From the group: "...the reality is that raising funds for medical marijuana policy changes is incredibly difficult, especially given the improvements made to the proposed program by the Ohio General Assembly and the fact that the Governor is expected to sign the bill."

Even though the Statehouse finally did a helpful thing and passed a medical marijuana legalization bill this week, Ohioans for Medical Marijuana are still working toward getting their constitutional amendment on the ballot in November. In fact, the group says that the state legislature's work "bolsters" their own efforts.

Ohioans for Medical Marijuana must gather 305,591 valid signatures of registered voters by July 6.

“Our Constitutional amendment builds on the legislature’s work by incorporating national best practices and offers voters an opportunity to enact a law free of the horse-trading inherent in the legislative process," said Aaron Marshall, spokesman for Ohioans for Medical Marijuana. "Our amendment also protects the rights of patients in the Ohio Constitution, not leaving this important issue vulnerable to the reach of special interests.”

Note that Gov. John Kasich still has to sign the bill into law. It's still kind of unclear whether he will. "He's said if we need it and we got a good bill he'd be OK with it," spokesman Joe Andrews cryptically told Cleveland.com.