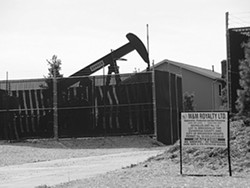 Citizens from Medina, Fulton and Athens counties are gathering in Columbus today to protest Secretary of State Jon Husted's ruling that those counties'  citizens may not vote on their own county charter initiatives, despite meeting requirements to place those initiatives on the November ballot, community organizer Tish O'Dell says.

Petitions for a Community Bill of Rights were circulated and signed in those three counties in a push for control over oil and gas drilling, among other health-related forces. The Medina Post summed the petition up succinctly:

Those activities include the regulation of drilling new oil and gas wells and pipeline construction which are prohibited in a citizen’s bill of rights included in the new charter. Charter proponents launched their initiative primarily as a means to derail the NEXUS gas transmission line which Spectra Energy plans to build across Medina County and several other Ohio counties.


Husted insists that state law on fracking already exists, and that these bills of rights would circumvent that. The community organizers are saying that Husted's job in this instance was merely to review the validity of the petitions and, if all is in order, push them along the democratic process toward the ballot. Those organizers and the Community Environmental Legal Defense Fund have filed suit against Husted's office.

Earlier this year, a judge overturned a similar charter measure in Broadview Heights.