The county saw at least one possible death due to exposure 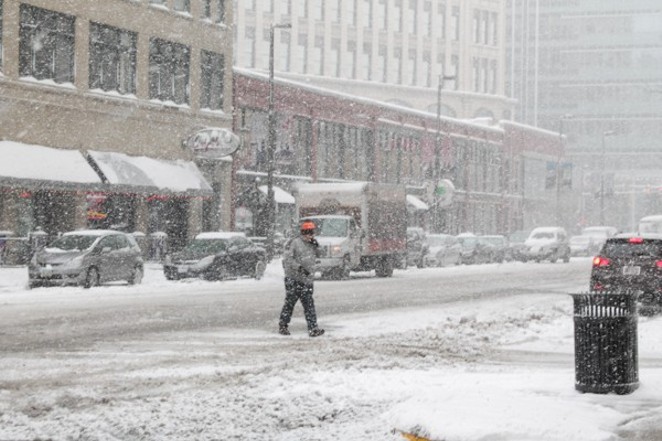 Emanuel Wallace
As the four-day bomb cyclone and blizzard ripped across the Great Lakes, MetroHealth reported a 10-year record for frostbite victims as temperatures dipped into sub-zero wind chills in Cleveland last weekend.

"This is the biggest influx I've ever seen in my nine years at MetroHealth," Andrew Neading, the burn program manager, said. "For a 24 to 48 hour period, [we] saw record high frostbite injuries."

Although Neading noted it's too early to count the entirety of frostbite and hypothermia victims—both caused by exposure to low temps for more than 30 minutes—he said that all eight of Metro's burn unit beds were full by Saturday, leading to expanded inpatient care in overflow beds.

Most of those patients, he said, were those suffering grade one or two frostbite, when toes and fingers start to feel numb and turn light red, symptoms typically alleviated with medical wraps and pain medicine. (Frostnip, as it's usually called.)

"And it's not just those seeking shelter," Neading added. "It's also someone who goes out to get the newspaper and falls and hits their head. And no one realizes they're down for several hours."

While Buffalo mourns the loss of at least 37 people who died during the storm, and fears more as the city continues to dig out, Cuyahoga County saw only one or two possible deaths from exposure.

Frances Washington is one of them. The 72-year-old woman was reported dead at 8:21 in the morning on Monday after Cleveland Heights police found her lying in snow outside of Forest Hill Place assisted living on Mayfield Road.

According to the police report, Washington was last seen by an employee who recalled giving Washington her medication at 10:30 the night before, as temperatures in Cleveland Heights hit 3 degrees.

Detectives suspect that Washington may have wanted to step out to buy something at her favorite gas station next door.

Though the investigation is still pending, as well the results of an autopsy by the Cuyahoga County Medical Examiner's office, it's likely that Washington forgot her keys on her way out.

"It appears that [she] may have attempted to get someone's attention inside, and also tried to get in through the fire exit," officer Brian Ondercin, who was first on scene, wrote in the report. "But it was locked."

Joseph Stopak, manager of the morgue operation at the Medical Examiner, said he was unable to comment  about Washington, noting also that "it's too early too tell" about how many residents of Cuyahoga County succumbed to the storm.

A spokesperson at the Cleveland Clinic said that the influx of hypothermia or frostbite patients "were consistent with other cold snaps," adding that the total clinic emergency patient intake "was down from normal" from Friday to Monday.

Vicki Noble, chair of emergency medicine at University Hospitals, said through a spokesperson that UH saw two severe hypothermia cases throughout the bomb cyclone—one of which resulted in death. As for why numbers were low, Noble attributed it to the city's successful warming center notifications, along with "luck" compared with Buffalo's disaster.

Neading, Metro's burn program manager, urges Clevelanders to prepare properly for more subzero days. He recommends covering every exposed skin area as much as possible and to keep extra pairs of gloves, hats and blankets in the car. And for the elderly, ensuring routine check-ins are ramped up.

"It sounds so silly and simple, but even just stepping outside for a few minutes," Neading said. "It takes one slip. It takes forgetting your keys. And it can happen pretty quickly in these types of temperatures."

Statewide, 10 people died in fires, which authorities say could be tied to the freeze, whether from faulty space heaters or other causes.

1,024 Ohioans remained without power as of Wednesday evening.