Mine Reclamation Funding Is a 'Game Changer' for Eastern Ohio 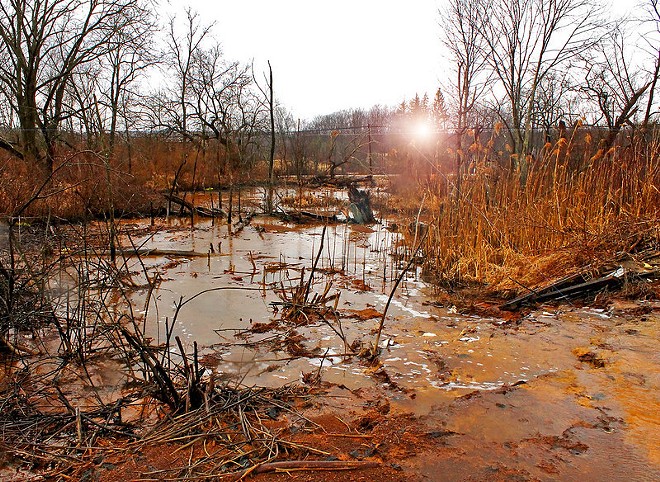 (Jack Pearce/Flickr)
Acid mine drainage from surface mining in eastern Ohio is just one of the environmental hazards of abandoned mine sites.

Efforts to rectify the lingering environmental legacy of coal mining in Ohio are getting a big financial boost.

In Ohio, there are more than 3,400 abandoned mines, according to the Department of Natural Resources, posing health and safety risks to people and the environment.

Marissa Lautzenheiser, director of northern programs for the group Rural Action, cited lists of potential projects where the estimated $550 million Ohio will receive would be well-spent.

"This is a game changer," Lautzenheiser asserted. "The landscape of eastern Ohio is going to look a lot different in five years, let alone in ten years, than it would have without this investment."

She pointed out the funding is especially important for Ohio communities hit hard by the coal industry decline, because it will create 730 jobs, nearly $2 billion in economic output and $660 million in labor income.

Since the federal Abandoned Mine Lands Program was created in 1977, roughly 978,000 acres and $8 billion worth of damage has been cleaned up in the region. But it represents only about one-fourth of the total damage.

"If you build your home adjacent to or on an underground mine, you can find your basement floor collapsing into air shafts," Lautzenheiser outlined. "You can have acid mine drainage, where the water in the stream in your backyard is actually orange because of iron and other heavy metals."

Dana Kuhnline, legislative coordinator for the group Appalachian Voices, said with a large influx of money, the goal is to address the environmental hazards.

"State agencies and the local reclamation partners have all been pretty strapped," Kuhnline acknowledged. "They've been doing a lot of what I've heard described as 'chasing landslides.' So, they're only able to address the most severe or dangerous incidences of abandoned mine lands that are in communities."

The full cost of reclaiming all remaining abandoned mine land nationwide is expected to exceed $20 billion, according to the Ohio Valley River Institute.