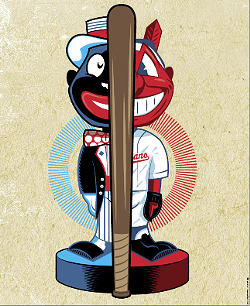 In what looks to be MLB Commissioner Rob Manfred's first official, public comments signaling a clear opposition to the Indians' continued use of Chief Wahoo, an MLB spokesperson told The New York Times Manfred has made it apparent to the team his “desire to transition away from the logo.’’

The statement follows an offseason in which Manfred told ESPN and other outlets that he wanted to talk to Paul and Larry Dolan about the logo, which once again became a national discussion after the Tribe's march to the World Series last season.

In January, at a press conference to announce that the Indians had been awarded the 2019 All Star Game, Manfred told reporters that he had in fact discussed the issue with the team but there was  nothing new to report.

"I think we'll produce a result that will be good for the Indians and good for baseball," Manfred said at the time. "What exactly that is, I don't want to speculate."

There's still only speculation now, and not much new to report, but Manfred at least has made his preference clear.

“We have specific steps in an identified process and are making progress,’’ an MLB spokesperson told the Times. “We are confident that a positive resolution will be reached that will be good for the game and the club.’’

When that will happen isn't crystalized yet, mainly because a large faction of the team's fanbase retains inflamed passions about the logo. The Indians are very aware of that, and during a season in which they've sold more tickets than they have at this point in years, it's a delicate situation. Even though it shouldn't be and they know it.

Bob DiBiasio, the Indians’ senior vice president for public affairs, said during Tuesday’s home opener that the club understood the passion on both sides of the issue and that in some ways the team was caught in the middle, trying to find an amicable solution.

“We certainly understand the sensitivities of the logo, those who find it insensitive and also those fans who have a longstanding attachment to its place in the history of the team,” he said.

DiBiasio called the continuing talks productive between Manfred and Paul Dolan, the Indians’ chairman and chief executive. With their sights set on a return to the World Series, the Indians would prefer to address Chief Wahoo after the season to avoid any distractions that could alienate a large swath of fans while games are being played.

“Our primary focus right now is on the team,’’ he said.