Murals along RTA Red Line are Planned for RNC 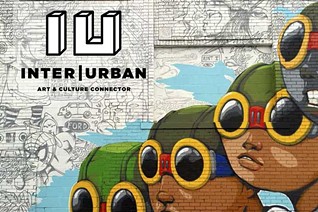 "Flyboy" by Hebru Brantley / Photo: LAND Studio
LAND Studio is calling for artists or artist teams to create large-scale murals on the blank or graffitied concrete walls that currently greet riders on the RTA Red Line when they arrive in Cleveland.

The first phase of the Inter / Urban project, funded by the Cleveland Foundation and the Northeast Ohio Areawide Coordinating Agency (NOACA), is intended to be complete by June, in time for, (you guessed it), the Republican National Convention.

"Because this is such an important and unique project," reads the LAND Studio Request for Qualifications (RFQ), "instead of the typical submission of pre-conceived proposals, artists will work with LAND studio, the Curatorial Team, and the Project Advisory Committee...to develop designs related to themes inspired by the Anisfield-Wolf Book Awards."

The Anisfield-Wolf Book Awards are the annual prizes bestowed to writers who challenge and explore racism and diversity in their work. It is the only prize of its kind in the country.

The "curatorial team" will consist of two principals with the Hawaii-based group POW! WOW!, "dedicated to the proliferation of murals worldwide," and Hingetown's own Fred Bidwell, of the Transformer Station.

A $150,000 grant from the Cleveland Foundation, $357,000 from NOACA, and support from the city's department of economic development are making the project possible. Valerie McCall, RTA board member and Mayor Jackson's chief of government and international affairs said it was certainly propelled by the RNC but would endure for many years.

Linda Krecic, of RTA media relations, told Scene that the airport station itself, the W. 25th St. Station, and the areas between W. 25th and W. 65th were prime spots for consideration.

"This is being designed really with the riders in mind," she said.

At RTA's final board meeting of 2015, a transit activist mentioned in public comments that both of the RTA's ticket machines at Hopkins Airport were broken, and that if the transit agency really wanted to welcome visitors to Cleveland, it might at least consider providing functional equipment.

Interested artists are asked to submit portfolios to LAND Studio's Joe Lanzilotta at [email protected] before the 1/22/2016 deadline.