They love being Parrotheads, even if they're pissed at Jimmy Buffett. 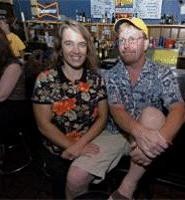 Walter Novak
Parrotheads Paul and Vicky Koziol are always up for partying.
Coronas fizzing with lime wedges nestle against old-man bellies protruding from Hawaiian shirts. The blond cheerleader and the spiky-haired captain of the football team -- now in their 50s -- slow dance like lovesick teenagers. Wasted away again in Margaritaville.

On Thursday night at Put-in-Bay -- a Lakewood bowling alley and bar styled after the local party island -- the Northcoast Parrot Head Club gathers to celebrate Jimmy Buffett's music, if not the man.

"Most Parrotheads I know have been turned off" to Buffett, says club President Dennis King.

In his heyday, Buffett was like Timothy Leary for the midlife-crisis set, preaching escape from the soul-squeezing corset of Middle America. Salvation was the warm sand of the Florida Keys. The eucharist was a slushy, salt-rimmed margarita.

Buffett lived the life he sang about, memorializing his bleary-eyed, sand-in-your shoes adventures in songs like "My Head Hurts, My Feet Stink, and I Don't Love Jesus" and "Why Don't We Get Drunk and Screw." His cultlike army of fans, who dubbed themselves "Parrotheads," worshiped him like a drunken deity.

Now Margaritaville is an industry with an annual income greater than some of the island nations Buffett sang about. Buffett has climbed the ladder from beach bum to corporate titan, collecting millions in profits from chain restaurants, retail lines, even New York Times bestsellers.

All of which has some Parrotheads feeling like they got stiffed at the tiki bar. Prices to his concerts have climbed to well over $100. And in what may have been the ultimate buzz kill, Buffett sat down with 60 Minutes in 2004 and told his loyal Parrotheads to "get a life."

No wonder Buffett isn't very popular at the regular monthly gatherings of the Northcoast Parrot Head Club. The group meets the second Thursday of each month at Put-in-Bay Lakewood, which is probably as close as Ohio gets to Margaritaville.

Club President King, a Channel 19 control-board operator, resembles John Candy in a fluorescent green shirt. He doesn't even go to Buffett concerts anymore. Only eight of the Northcoast Parrot Head Club's 80-some members bought tickets for the Buffett show in Pittsburgh this year.

But that's OK, says King. "We can do all sorts of things [Buffett] has absolutely nothing to do with." Like the club's annual "Phlocking of the Phaithful" outing to Put-in-Bay -- you're considered a "virgin" if you've never been. There are also dozens of house parties and bar nights throughout the year.

When the owner of Lakewood Lanes gave the bar an island-inspired face-lift earlier this year, the Parrotheads descended like wine-buzzed parents on a wedding dance floor. Tonight's Buffett cover songs are provided by Chuck Cornwell, whose bald head and sinewy frame make him look ready for the Tour de France. His one-man band tours from Marblehead to North Olmsted, playing everything you'd expect to hear on a jukebox in Parma. But tonight it's all Buffett.

"It's more than the music; it's a lifestyle," says Paul Koziol, a nasal-voiced Continental Airlines worker. "We're all a bunch of middle-aged people who have one thing in common: We love music. And when it comes to partying with women in coconut bras, count me in."

Vicky, his smiling wife, who has the look of an aging hippie, flashes Paul a look of playful disapproval.

"I'd like to see my wife in a coconut bra," Paul adds, nudging her friskily.

Parrothead "Jungle" Bob Tuma -- he's an exotic-animal handler -- says he was more attracted to the party than the music.

"Jimmy Buffett's nice on a cool day in the summer, but it's not rock and roll, man," says Jungle Bob, who's dressed in the requisite flowered shirt and sips a Buffett-approved Corona. "They're a very accepting bunch. They'll let anybody in."

For a lot of Parrotheads, listening to Buffett's music now is like flipping through a photo album of their youth. Maybe it was the girl they fell in love with in the parking lot at Blossom while doing an upside-down margarita, or the time they got high for the first time and listened to the entire A1A album on vinyl.

Maybe it was the soundtrack to that universal dream of driving to the coast and throwing your old life into the night waves like a bottle with a message in it. "When I started listening to him, all I wanted to do was run away to Key West," says Patty Collins, a curvy blonde holding a Bud Light bottle draped in a Hawaiian lei, who remembers seeing Buffett open up for the Eagles in the '70s.

She never did run away. Instead, she started a family and went to work as a church administrator in Berea. She recently turned 48.

At this point, King has begun to forgive Buffett's transgressions. He considers this acceptance the next natural stage in the evolution of the modern-day Parrothead.

"You might have had these idealistic ideas about the guy in the beginning, but now you realize he's just a human being, and he's trying to make as much money as he possibly can."