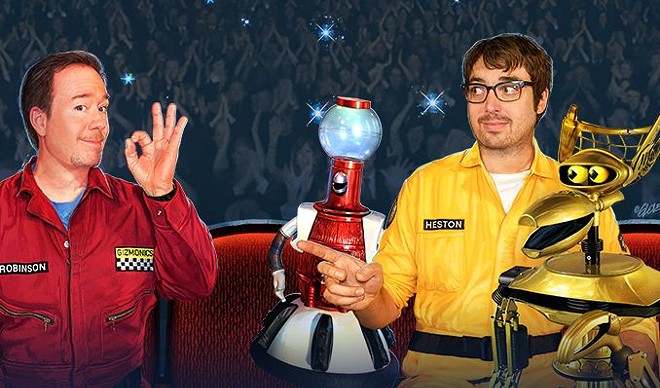 Alongside new MST3K host Jonah Heston (Jonah Ray), Hodgson and the Bots will bring new movies and all new riffs and sketches to the stage. In a recent phone interview, Hodgson speaks about what to expect from the live show that takes place at 6:30 p.m. on Thursday, Oct. 25, at the Agora Theatre.

When the show first started, did you think it’d still be going strong after 30 years?
No. I could only think a few years ahead back then. It’s completely ridiculous. It’s great to come back to it and see these new faces that are now making the show with me. It’s amazing to find people like Jonah Ray and Patton Oswalt to help out. They were all 13-year-olds or younger when we started the show.

What was the first show like?
For the pilot, we showed Green Slime, which was a Toei movie. To me, that was the quintessential movie we wanted to use. It was a Japanese and American co-production, so it had crazy monsters and serious actors trying to put across real emotions. That was perfect for what we did.

After it aired, what was the reaction from fans like?
It wasn’t very clear back then because there was no Internet. We set up an answering machine and put our phone number on the screen. The show would run on a Sunday, and in the morning, it was full of people leaving messages. That’s when we found out that people liked it and cared enough to call in. Some people thought it was crazy and weird. Some people said they thought something was wrong with their TV. It was very disorienting for some of the population, and some people liked it.

I think you left the show in 1993. Why?
It’s well-documented. We did a Wire magazine article four or five years ago. I was fighting with my partner Jim Mallon. It was mostly about the feature film. We were fighting about that. I realized I was getting unhappy. I thought it would hurt the show if I stayed on the show. You can’t riff unless you’re in a good mood. I thought it would be best for me to leave. I thought that was the best path. It was frustrating, but I felt like it was important for the life of the show. I don’t think I ever stopped thinking about coming back to the show. I was really grateful that everything worked out, and I could come back. I still had a lot of ideas for it, and that’s manifested in the new series and in the live show.

What’s it been like working with Netflix?
It’s been great. Part of it is the backers who set it up, so we could make 14 episodes. We had the ability to do it exactly the way we wanted. Netflix picked it up after that point. They’ve been awesome. They let us do whatever we want. We don’t do things that are questionable or challenging. They’ve been pretty good partners so far.

What do you like about the current cast?
Well, it’s really amazing. They all really care about the show. They grew up with it and know the feeling of being 13 and finding it. I don’t have to do a lot of supervision. It’s nice to have these talented people. We got Elliot Kalan who was a writer for The Daily Show when John Stewart was on. He’s amazing. and Jonah [Ray] and Felicia [Day] and Patton [Oswalt] are really talented. It’s pretty great. I feel so grateful just to see it. If something would’ve happened and another 10 or 20 years or 30 years went by before the show relaunched, I don’t know if I would have had that kind of connection with the people who wanted to bring it back.

The new season starts up in November. Talk about what we can expect.
I have to be careful about that. We’ll be letting things out as we go. While we’re on the road, we want to drop hints and letting people know about what’s going to happen. They have to come to the show to find what the new stuff will be like.

And what will this live show be like?
If you haven’t seen movie riffing live, and you like movie riffing, this is the apex of the industry right now. It’s the biggest production in the world. The show is realized on stage with the sets and the puppets and the robots. You’re not alone with the show, but you’re in the room with 1500 other people. It’s a really different thing. It’s like a living thing. There’s a different vibe to it, and a different set of skills for the performers.

How much longer do you see the show going on?
To me, as long as they make bad movies, there’s no reason why it has to end.